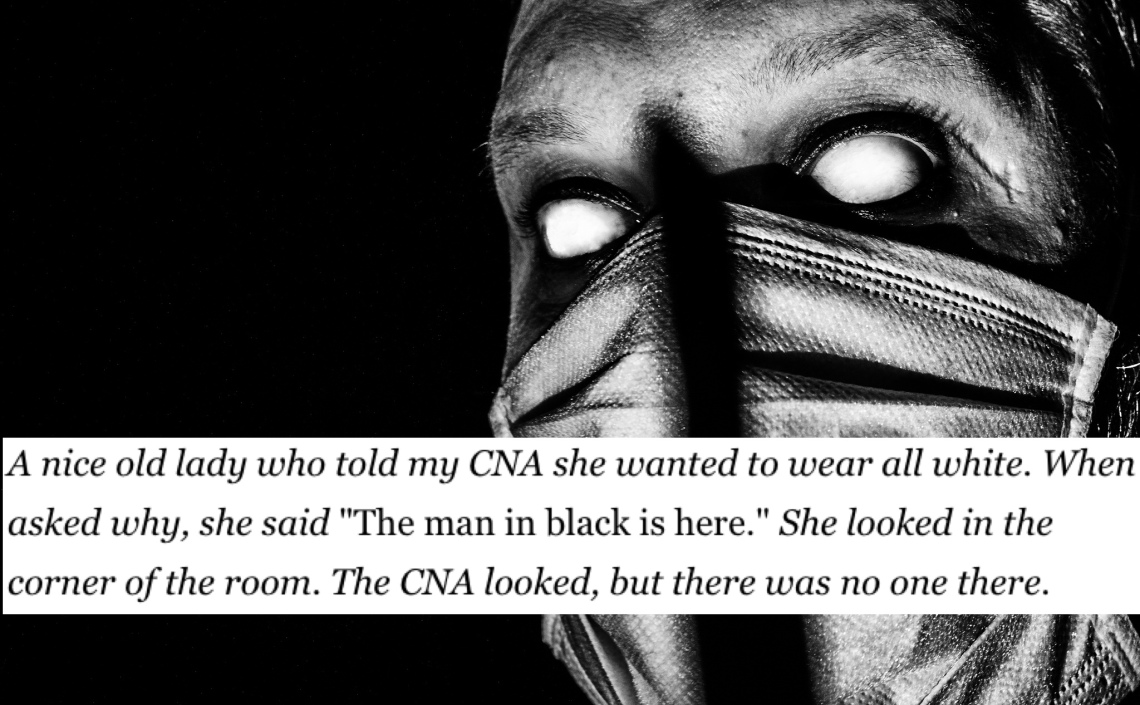 Death. Whether you call it kicking the bucket, carking it, passing on, or going for the eternal rest; it’s something that eventually affects us all. To that end, some of us are terrified of it, some of us have experienced what it’s like to lose loved ones, and some of us are yet to feel its daunting presence in our lives. Some blokes and blokettes who know it on an almost intimate level are medical workers. Whether they’re nurses or doctors, they’ve been there for countless deaths. And that means they get to hear a lot of ‘last words’. Sometimes, those last words are pretty haunting.

“Working caregiver in my earlier days I overheard an old woman console her dying husband.

Dammit, Jim, you have beat so many things in your life. For heaven’s sake you beat that murder charge for that guy you killed. You can beat this..

She did not know I was listening. Dude died the next day.” Babybopp

You’ve got to love those last minute plot-twists, right?

“I was about five or six when my grandfather was on his deathbed. The last thing he did was put his hand on my shoulder and said, “No wonder you never liked my spicy food.” and then he passed about ten seconds later. We were all super confused. About three months later I almost died from suffocation after eating some salsa. At the hospital I was diagnosed with a capsaicin allergy (Spicy food). To this day it still creeps me out. No one knew I was allergic before then, and I didn’t show any signs either.” Broken-Nightlight

The idea of famous last words is one that we embrace the f**k out of in literature. S**t, we reckon here’s probably more than a few of you out there who’ve already planned your own last words. If you have, we hope they’re as bloody epic as you want them to be when your time comes, but by the same token, we want that time to be a long way in the future.

“One of my co-residents snuck a beer into the hospital for a dying 9-year-old kid. He was clearly on the way out and said “I’m sad I never got old enough to have a beer” so my friend snuck one in and gave the kid like half of it. He enjoyed it.” Porencephaly

Remind anyone else of Baseketball?

“Not a medical worker, but I went with my father to say goodbye to my great-uncle (his uncle). He was suffering from dementia and clearly on the way out — he no longer recognized people.

My father was an only child, and spent most of his time being raised by his uncles, as his father ran a farm all day.

Anyway, we’re sitting there, and great-uncle is snoozing. He suddenly wakes up and clearly sees my father and starts talking to him about a barn and describing it in great detail. Like, he’s talking about where it is, the way the paint was flaking off in one corner, and so on.

My father is quieter than normal and just saying “yes” over and over as he describes the barn.

Then, just before great-uncle loses consciousness, he describes going into the barn and setting it on fire.

Turns out that my grandfather and great-uncle were having a helluva dispute at one time and burned down the barn to get back at him. Everyone suspected, but never knew for sure.” MagicJasoni

Naturally, though, for most people, their last words are a spur of the moment thing. They’re a product of the thoughts that come in the final moments, and they can reveal a moment of powerful lucidity from an otherwise delirious mind, a moment of poignant profundity, a sign of enduring spirituality, or just that final graceful kiss of keen humour.

“My great grandma did this as well, and she had dementia. Luckily it wasn’t a huge secret she spilled when everyone was gathered around her deathbed. My grandma is a very small woman and was lamenting the fact my great grandma was the only one who could find her shoes that fit. My great grandma, who hadn’t had a lucid moment in years, turned to her and said “that’s cause I used to buy them in the children’s section! Why do you think you never got the box?” From the stories my mom tells, and the little I remember of her, those were pretty fitting last words.” Link_and_theTardis

Gotta love someone who’s a smartass till the end.

“You tell that man to get out of here right now!” she screamed while starring behind me, eyes sharp and focused on something. Me, in the middle of the night. While I was working the haunted hall, by myself.

All of the heebie’s, and most of the jeebies.

Thanks to Reddit – as always with discussions like this – a bunch of Medical professionals have just revealed some of the last words that have always stuck with them. Have a read. There’s bound to be something in here that’ll get you thinking.

“Student- “Sir, are you in any pain?” Patient- “The fuck kind of dumbass question is that I just got fucking stabbed, fuck yeah I’m in pain.”

He died within minutes.” Guisspino

Final thought: As always with some of these things, we want you to know that if you’re feeling like there’s no way out, this is triggering some tough emotions or you’re having suicidal thoughts, there’s help out there. Please get in touch with Lifeline on 13 11 14. You’re loved and needed and there’s always another option.

Do you ever have one of those days on the internet where you long for something from the past? We do, and we know that tonnes of you lot do—even if there is plenty of new stuff to enjoy on an almost daily basis. We’re...