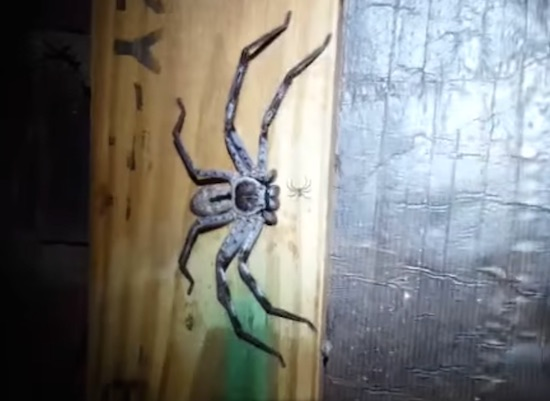 I’d look away right now if spiders freak you the fuck out. Here in Australia we have big bastard spiders called Huntsmans that like to live with you in your own home. The fellas can grow pretty big and can easily get to the size of your head without much fuss. They are rather typical in a normal Aussie household but they are normally out if sight and they eat up all the other little bugs and insects in your house, so they are like hairy leggy bros. The interesting thing about the video below is that normally if someone was shining a light at them they would scurry away quick smart, except this big bastard doesn’t really want to move.

Why you ask? It’s because this lady is protecting her nest of hundreds and hundreds of babies. Now normally I can deal with a few big spiders in my house, but I can’t deal with thousands of little bastards getting into my cereal, chips and energy drinks. That’s where I draw the line, as would most people I think. Me and my pet huntsman. Yeah nah f*ck that

For those with a bit of an inclining for a National Geographic type context, in order to mate with virgin females, male huntsman often search out females that are not quite mature and guard them for long periods.

All huntsman females are attentive mothers who actively guard their egg sacs and new-born offspring for around three weeks. For most huntsman species, these are the only social interactions they experience in their entire lives. Here is the backstory provided by the video owner:

“During a termite inspection for a client, I noticed a large huntsman spider, which isn’t all that unusual for these parts.

“What was unusual was that it didn’t scurry away because it was standing guard over a recently hatched egg case with a large number of hatchlings around the nest.

“For the record, these spiders are beneficial in keeping down the numbers of other pests and venomous spiders, so this spider and her babies are still living, helping me by removing other unwanted pests from my clients home.”

The Grand Theft Auto games are cult classics for a bloody reason. Ever since they first came skidding and squealing onto consoles everywhere, they’ve been great fun. They’ve also been fairly controversial, but more im...

Here at Ozzy Man Reviews, we love to keep abreast of the latest happenings in the news media. And of course, one of the big talking points in the news today is that Facebook has made themselves look a right tit by ban...

Grandma's love Facebook. They get to see pictures of their family, share recipes, cat videos and heal cancer through shares and likes. And, for Angela Nwachukwu, Facebook was also good for another thing: meeting her n...

Have a go at this! Imagine just driving along a stretch of highway, taking in the sights, playing some tunes, dodging some road kill when you look at the window and realise HOLY F*** that’s a tornado! That’s exa...

Five Year Old Draws Picture Of Mum On Her Period