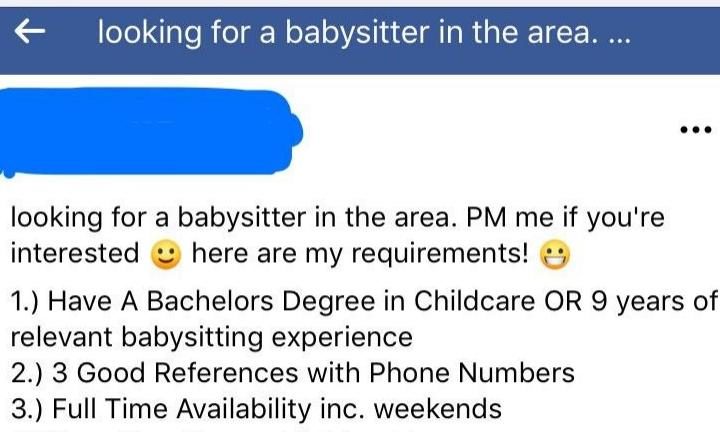 This sheila has gone viral for these bloody ridiculous babysitter requirements

Anyone who’s got a couple of tin-lids or more knows that good babysitters are bloody hard to find. Yeah, it’s really not like the television told us when we were younger. It’s way more difficult. You can rely on your family, but then you need to return favours, and if you want strangers to do it, you need to be prepared to pay a decent wage. Still, that doesn’t stop some mums from hoping. Check out this advertisement to see what we mean…

Before we start, why don’t you have a think to yourself about all the babysitting stereotypes you know of.

You’ve got the obvious ones like the babysitter who has her boyfriend come over and the British nanny who’ll probably smack your kid silly, but we’re sure you can come up with more. Once you’ve done that, put the shoe on the other foot and ask yourself what you’d be looking for in babysitter. You’ve probably got a few basics on your list. Things like ‘mustn’t smoke inside’, ‘not a drug addict’, ‘will show up’, are probably pretty fair, but what if you want more?

Well, one sheila who did want a whole lot more was this mum from the States. Unfortunately, we don’t know too much about her, but this list is out of bloody control.

Deadset. And, yeah, we know a few of these things seem fairly reasonable, but altogether, they paint a pretty picture.

And then there’s the racist stuff. Or is that just us?

Anyway, just a few of the things she wants include a friggen Bachelor’s Degree in childcare OR nine years’ experience, full availability, a native English speaker (with a second language), willingness to buy snacks, and a willingness to work for $10 per hour – even though it’s actually more like $15 because you’re not paying tax.

As you can see, it’s a bit bloody rich.

Final thought: You’ve gotta wonder if anyone actually bit at that, because that seems like a very demanding parent considering the pittance you’re getting paid. Still, let us know if you reckon it’s over the top or whether you think it sounds like a good deal.