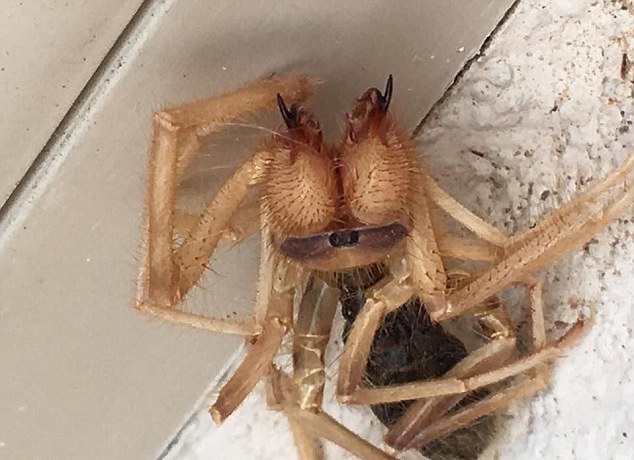 Australia is pretty well known for its horrifying wildlife. Spiders, snakes, sharks and even bloody drop bears can all kill you and make sweet sweet love to your carcass.

But it turns out we’ve got nothing on this f***ing demon-spawn some bloke in Arizona discovered in his backyard the other day.

That thing right there is known by experts as a camel spider or wind scorpion.

Look at the size of it. And correct me if I’m wrong right now, but did I see one in John Carpenter’s classic horror movie The Thing? Anyway, let’s get back to the story. Thomas Acosta, the poor bloke who came across it while enjoying a nice day at home, must be as tough as nails because he didn’t immediately go insane and start screaming, “The horror! The horror!” when he found it.

He has since decided to call an exterminator. I hope the exterminator is Van Helsing because I don’t think anyone else is up to the task.

If you cut them in half they multiply! (Credit: Viralthread)

If you haven’t run away and set fire to your computer yet, you might want to know that technically it’s an arachnid that’s the missing link between spiders and scorpions.

When it’s hungry it eats lizards, birds, mice and small children. When it’s not, it just kills them.

And get this: it possesses the biggest mouth-to-body ration of any known animal outside of my mother-in-law when she’s on the sauce!

And now, let’s get scientifical about it. It looks like it’s got ten legs, right? But yeah, nah, if you thought that you’d be wrong. The first two ‘legs’ next to that lovecraftian thing that it calls a mouth are ‘Chelicerae’.

What do you reckon they’re used for? (Answer below)

On that final note, let’s give you the good news. It’s not venomous, only nightmare-inducing. Sweet dreams when you sleep tonight, ya legends.

By Buster Cinnamon 4 years ago