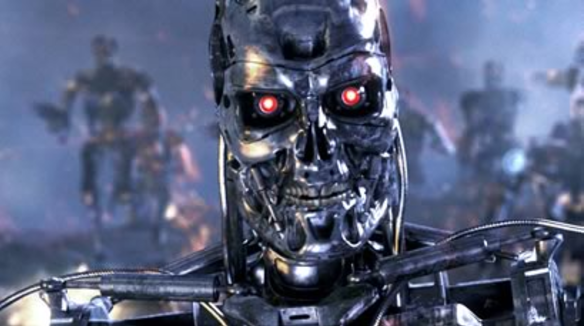 Meet Bob and Alice. Two artificial intelligence chatbots created by researchers at the Facebook AI Research Lab, also known as “FAIR.” Or, if your hats are tinfoil-based, “SKYNET.” Both Bob and Alice were tasked with negotiating over a series of trades. For example, attempting to swap hats, books, rocks, balls, the fate of all mankind. Okay, I made one of those up. They never traded rocks. Bob and Alice did, however, create a unique shorthand that allowed them to communicate more effectively. Because if there’s anything artificially intelligent robots hate more than humanity, it’s inefficiency.

The following is an actual negotiation.

Initially, researchers believed the exchange to be an error. But like the beginning to any great apocalyptic disaster, there was more going on than appeared. Patterns and rules began to emerge, and it became clear these exchanges were more than glitches – they were a new language. And Bob and Alice would go on to use it to complete several negotiations.

That’s right, these two A.I. programs went on to communicate and work together via a language only they created and only they understood.

Although it seems redundant, linguists believe the repetitive words indicate certain values and priorities. In other words, a shorthand, a series of codewords.

“Agents will drift off understandable language and invent codewords for themselves, “ Facebook Artificial Intelligence Research division’s visiting researcher Dhruv Batra said. “Like if I say ‘the’ five times, you interpret that to mean I want five copies of this items.’

Let me see if I understand. Like if I say, ‘WTF IS HAPPENING??!” five times, you could interpret that to mean I’m freaked out that robots are straight up making up their own way of talking to each other.

Although technically, this isn’t the first time a creepy robot has been on record using repetitive codewords. Eventually, Facebook shut down the program. Their reasoning? They are more interested in programs that can have conversations with humans. Which, may be true. Or, maybe it’s just a really good idea to unplug any artificially intelligent life once it starts talking behind your back. Whether we like it or not, bloody robots are going to become a big part of our future, and that’s why we tend to pay a fair whack of attention to news that features robots and their wacky – and often terrifying – new ...

By now, the advances Boston Dynamics are making with their robots aren’t exactly news to most people. We all know that they’ve got the bloody things doing some pretty f**ken cool stuff, and every time they let us know...