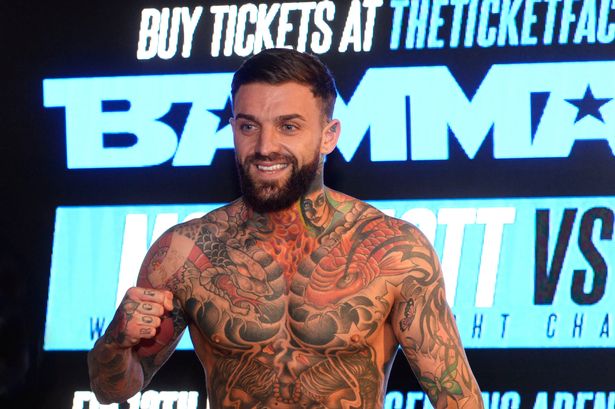 You may know Aaron Chambers from the British reality television show Geordie Shore, but now you’ll have to remember him as a professional MMA fighter whether you’d like to or not!

Chambers has just fought and won his first professional match at BAMMA 29: McDermott vs. Wolf out in Birmingham. Because of his history on television, many fans tuned in to see just how the fight would turn out, especially after the weigh-in. His opponent was Greg Jenkins, and the 29-year-old reality television star came in prepared. So, back to the weigh-in, the two actually had to have security pull them apart when Chalmers was pushed back by Jenkins – you know they were ready to go! The pair were forced to be separated at the weigh-ins

In the end nothing more came from the situation until the night of the fight, and that’s when Chalmers decided to return the favor tenfold. You could tell there was a portion of the crowd in attendance solely to see him fall, believing this to be little more than some PR stunt for some added publicity, but there was no bringing this star out of the sky. Very quickly he proved he was in the ring because that’s where he was called to be, and that he would fight for it if he has to. He started off with a light flurry of punches that gradually progressed and got stronger, not giving Jenkins a moment’s rest to collect himself and figure out a way to counter through the onslaught. Before he even knew it, Jenkins was tapping out from an arm lock and the fight belonged to Chalmers. All in the first round. This is why I’m constantly telling people not to judge someone until they’ve had a chance to prove otherwise. I mean, we’re all a little judgmental, but only because there’s reasons to be. But Chalmers really put on a show, except this time it was for the fans of the fighting world, and for himself. From the winner’s own mouth:

“I’m putting my heart and soul into this camp. I plan to go out there and leave it all on the line” he said. “My opponent is just a stepping stone that I will stamp on and continue my journey onwards.”