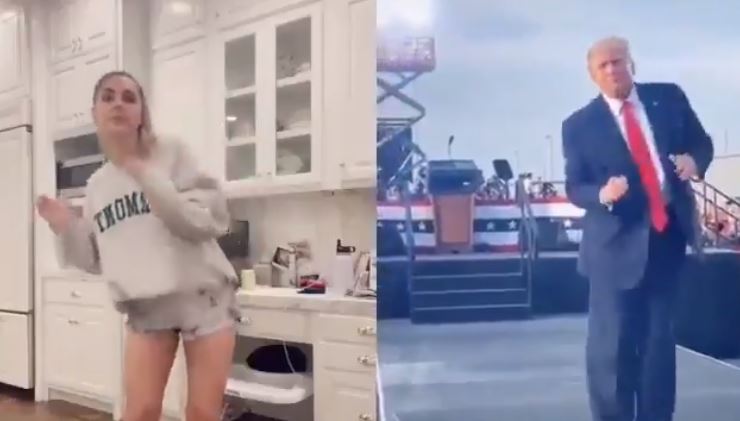 Donald Trump has started his very own bloody TikTok trend

Donald Trump. There’s probably never been a US president as divisive. We’re going to avoid the political stuff for now, though, and focus only on the fact he’s unintentionally taken a break from spawning monumentally f**ked-up kids and bankrupt businesses to spawn a new TikTok trend. Yeah, nah, at the end of his recent rallies, he’s been playing Y.M.C.A, and since he gave a weird little dance at one of his rallies, TikTok users have been replicating his moves…

Anyway, what we’ll say to get this started is that the dance is, well, it’s something. His moves have seen critics claim he’s not moving his hips because he’s s**t his adult diapers, while others are saying that the dance is proof he’s actually a normal guy. We’re not sure of the truth behind either of those statements.

Everyone is doing the Trump pic.twitter.com/DJ3OpHt67s

What we do know, though, is that AP described the dance like this: ‘he either pumps his fists back and forth “as though he’s on an elliptical trainer,” or jerks his body from side to side.’

Don’t stress, though, you’ll be able to check it out in a minute. Yeah, nah, we’ve got it for you. The reason for that is the fact it’s gone mental on TikTok.

Watching Trump's crappy dancing, all I could think of was Elaine on Seinfeld…#TrumpDance pic.twitter.com/9NI1CsORKG

One minute, TikTok users were dancing to a mash-up of Coldplay’s Viva la Vida and Savage’s Swing with their own moves, the next they were dancing to it by doing the Donald.

It all started right after TikTok user Julia Keith copied Trump’s moves. Just as other users imitated the kids who pissed themselves, they also mimicked Julia’s video.

There has been some debate as to whether the trend helps with Donald’s popularity ahead of the US’s most important election in years, but this is where we do have to mention that if something like this ranks as more important than all the heinous s**t the bloke’s done since he assumed power, the country might be f**ked.

Come on who’s going to join in the Trump dance?

Final thought: Let us know what you reckon about this one. Does it help or hinder the man? We’re not sure, but we reckon it’s possible to read into stuff a little too much. After all, if the man’s many flaws don’t put you off by this point, we don’t think a TikTok dance is going to change things. Still, you know where to post your comment.