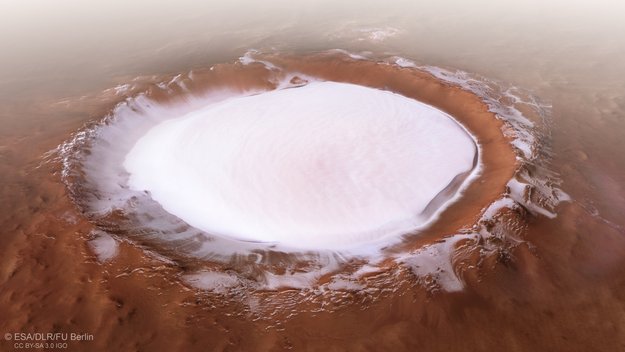 The planet Mars has held enduring fascination for scientists, writers, and the public alike for f**ken yonks. It’s long been the projected back-up plan for when our Earth finally becomes too unbearably hot, and as a result, it’s studied hard. We’ve known for a while that the red planet experiences climate similar to our own. We’ve also known for a while that it has polar ice caps, seasonal temperature changes and observable weather patterns, but the latest news on Mars is pretty f**ken rad. It’s got a big-ass crater full of ice.

And, no, we’re not talking about the northern suburbs of Brisbane here; we’re actually talking about a real-life crater full of real-life ice. The European Space Agency (ESA) has a hi-tech camera called the Mars Express, and it’s pretty bloody swish. Don’t ask me about the technical aspects of it; just trust me. It can take photos of an ice-filled crater on Mars. It must go all right!

Anyway, the crater we’re talking about is called the Korolev crater and it’s just a bit to the south of Mars’ north pole. Apparently, the ice is even water ice. That’s pretty f**ken exciting, because while we’ve always speculated about the existence of ice on mars, we’ve now got this! 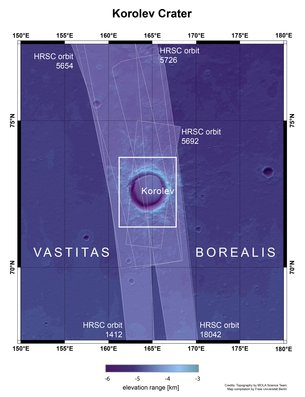 The ESA said, “Korolev crater is 82 kilometres across and found in the northern lowlands of Mars, just south of a large patch of dune-filled terrain that encircles part of the planet’s northern polar cap (known as Olympia Undae). It is an especially well-preserved example of a Martian crater and is filled not by snow but ice, with its centre hosting a mound of water ice some 1.8 kilometres thick all year round.”

Explaining how the ice manages to stay in the crater all year, the ESA explained, “This ever-icy presence is due to an interesting phenomenon known as a ‘cold trap’, which occurs as the name suggests. The crater’s floor is deep, lying some two kilometres vertically beneath its rim. The very deepest parts of Korolev crater, those containing ice, act as a natural cold trap: the air moving over the deposit of ice cools down and sinks, creating a layer of cold air that sits directly above the ice itself.” 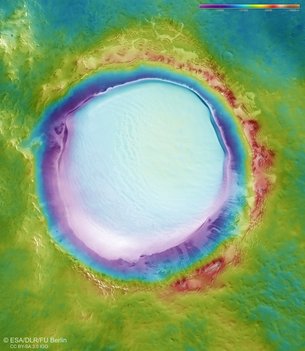 The topography of the big icy hole. Credit: ESA/DLR/FU Berlin

Final thought: What a time to be alive. You almost feel sorry for the scientists who could only stare at the red dot in the sky through their telescopes. Imagine how blown their f**ken minds would be if they could see this sh*t!

Just in case you missed it, here’s one of Ozzy’s latest commentary videos…Ozzy Man Reviews: WTF Happened in 2018