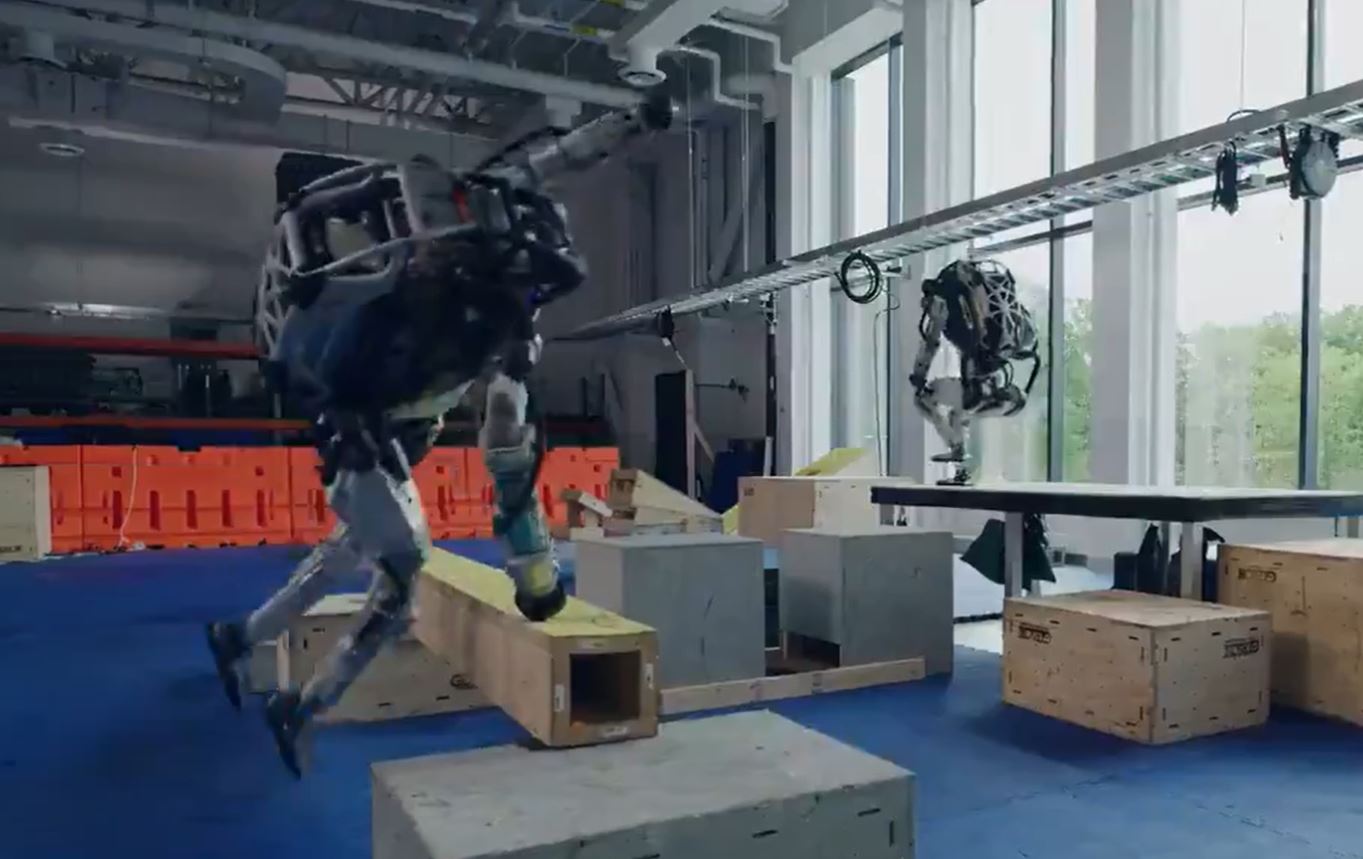 By now, the advances Boston Dynamics are making with their robots aren’t exactly news to most people. We all know that they’ve got the bloody things doing some pretty f**ken cool stuff, and every time they let us know, people seem to be divided. Obviously, the average bloke is just like, ‘ah yeah, what are they doing now?’ but you always seem to get some who see it as the end of days. We’re not sure where we stand, but we do reckon it’s pretty cool to watch the robots do their thing.

This time, as advertised, the robots are busting out Parkour moves across an obstacle course. As you’ll see in the video, they run through a routine that’s kinda similar to what we’ve seen before, at least until the grand finale: both of ‘em perform double backflips.

Boston Dynamics revealed this video of two Atlas robots completing a complex obstacle course that requires leaps, vaults, and some backflips for good measure. And no, Boston Dynamics isn't affiliated with Skynet… probably.

Of course, the obvious question here is ‘why?’ If you’re cynical, you’re probably assuming there’s some sort of military use, but apparently, the chief answer to this is because it’s just a means to an end.

Humanity is done for… pic.twitter.com/MLSobhSrTV

In the past, the company has said, “Ultimately, pushing the limits on a humanoid robot like Atlas drives hardware and software innovation that translates to all of our robots at Boston Dynamics.” Of course, testing the robots is also about keeping the engineers interested.

“The focus of these efforts are to select an application that can test the boundaries of the robot hardware (and associated control algorithms) while still being of interest to the robotics team,” reckons Ayanna Howard, dean of engineering at Ohio State University’s College of Engineering.

As an athletically challenged guy, I wasn't too impressed until they backflipped. I could beat the hell out of these bots in a race, but no way am I pulling a sick flip like they did.

Of course, the video has led to the usual comments from viewers:

One Twitter user claimed that ‘Humanity was done for, while another pointed out the implications of this in a fair dinkum chase.

"AHHHH! Sweet Jebus! I'm being chased by a robot!"
"Throw down a chair, that should trip it up!"
<throws chair>
<robot somersault jumps over it>
"F*CK! The moth*rf*ckin' robot knows moth*rf*ckin' PARKOUR!!!"
Dwayne Johnson & Kevin Hart star in "Oh no, Robo!" coming this summer.

On the other side of that, though, some people are pretty impressed, stating they would love to see our technology in another thousand years.

They really got those human movements down. Such progress . Gotta love scientist they invent stuff without ever wondering should they do it . pic.twitter.com/uwP9IW0MHP

Final thought: Yeah, we like the little nod in the quote that suggests this is more about the engineers seeing what they can do with the robots than any overarching goal. Still, let us know what you reckon. We’d love to hear it.