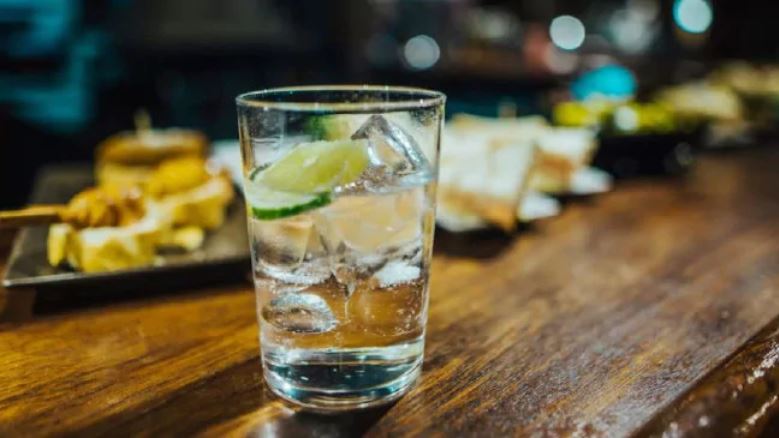 We dunno about you blokes and blokettes, but we’re pretty sure we live in a world in flux right now. We’re evolving as social beasts. The ways we’ve interacted in the past don’t always apply and, as a result, the rules are shifting and changing. One of the interesting parallels, is of course the twin evolution of gender equality and modern dating. This s**t represents what we’re sure is a particularly interesting petri dish for social researchers. And a pretty f**ken gross one for anyone else. Have a squiz at this story and let us know what you think…

All right, so first of all, Angela Doyle, has been exploring the world of dating and she’s been out there trying to meet Mr Right. Along the way, one of the blokes she met up with bought her a drink. It was about 5 Pommy pounds, so about 9 Ozzy dollarydoos. 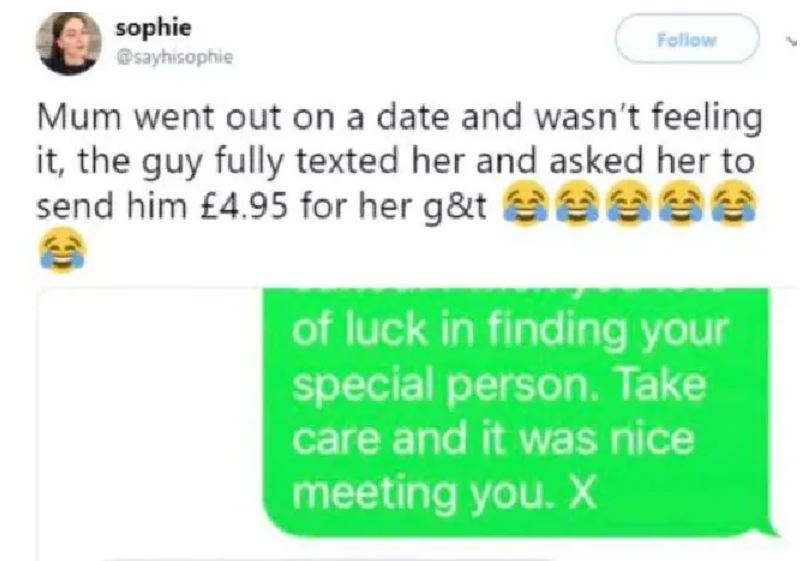 We don’t know whether he insisted, as we’re assuming he did, or whether she asked him to grab her a drink and she’d grab him the next one. That s**t is a mystery. It looks like there was only the one drink involved. Could have been more and the algebra didn’t work out, but from the information available, the analysis says one drink.

Anyway, Angela wasn’t feeling it. She pissed off home. Later on, she sent old mate a text saying it was nice to meet him, but she’d rather not do so again. And, in fairness, she politely told him to get f**ked. And this is where the question comes in: he sent her his bank details and asked that she paid him back for the drink. 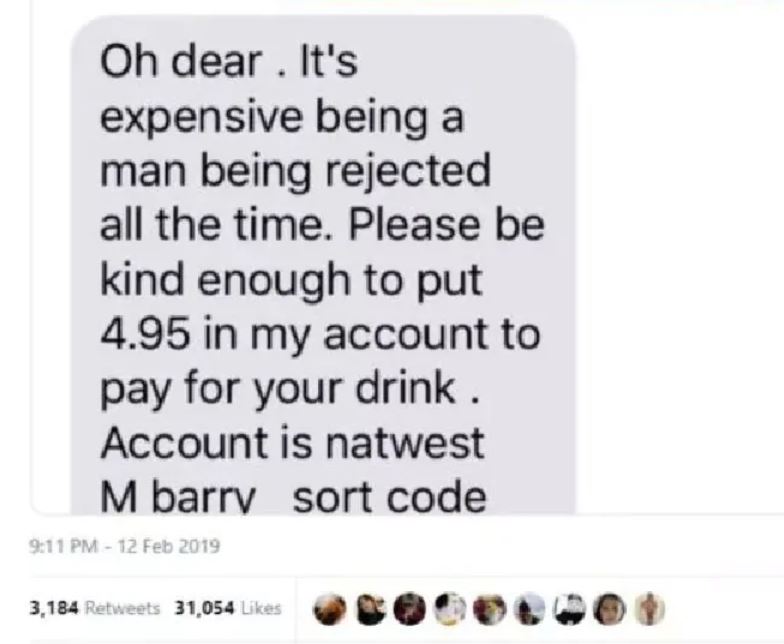 “Oh dear. It’s expensive being a man being rejected all the time. Please be kind enough to put £4.95 in my account to pay for your drink.”

Angela, obviously a bit shocked, showed her daughter who posted the exchange online. Obviously, the internet has lost its collective s**t over this one. We’re inclined to agree that on the surface it does seem petty, but, in the interests of giving everyone a fair f**ken go, we don’t know the full story and it could be a reasonable request in the right context.

Final thought: Going back to our ideas about equality, while we’re not sure, we’re guessing blokes originally paid for sheila’s drinks because they were the income earners and chicks didn’t necessarily have the capacity to do the same. These days, that s**t’s a bit different. The context here is murky, and could all be avoided by having everyone pay for their own drink, but we want to know what you think. Get amongst the controversy in the Facebook comments.