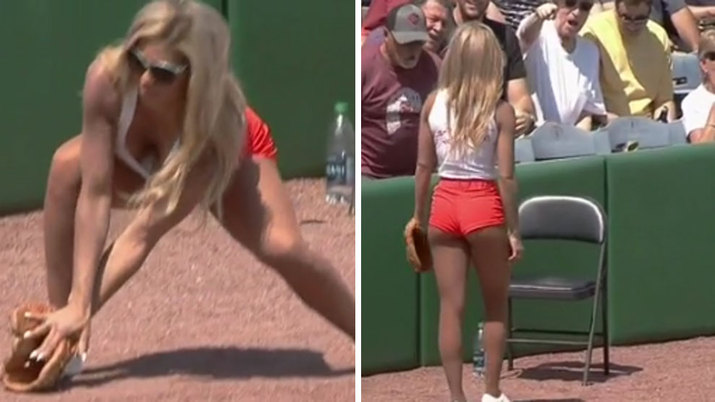 I’m sure we’ve all managed to mess up at our jobs at some point in our lives. Saying something you shouldn’t have in front of your boss while boozing at the staff Christmas party, a meeting missed due to poor timing, or maybe even falling over while taking food over to a table of hungry diners. Whatever it is, just be thankful it didn’t happen on live television in front of millions of viewers watching from home.

During a friendly baseball pre-season training game between the popular New York Yankees and the Philadelphia Phillies, a ball girl tried to catch an errant ball. The blonde stunner was working on behalf of Hooters at the time, and finally got the chance to show viewers what she could do out on the field. Hooters – best known for their “burgers”

The ball was rolling right toward her, at a pretty decent speed but nothing impossible to catch. She crouches down in anticipation, but moves a touch too slow, unfortunately misreading the direction it was heading in. The ball struck her in the front of her foot, and was launched like a miniature cannon ball behind her into the crowd.

I’m no baseball expert, but I think it’s probably safe to say these girls are hired for their baseball skills. “Through the legs! That’s not something you see every day,” said one of the commentators as the crowd gasped. “It’s like I tell my kids when I’m coaching, never under, always over. You never let it go under your glove.”

The worst part of the matter is that she literally had one job, and that was to catch the ball in front of the million of people watching the game around the world. You had one job!

The Major League Baseball season kicks off on April 2nd and will finish on October 1st. Hopefully we’ll get to see the ball girl have another crack at her job in between now and then!

Check out the video of the ball girl’s attempt to catch the ball below and let us know what you think: