One of the toughest parts of life is realising that the people you thought cared about you really couldn’t give a s**t about your opinions. Deadset, it can be a tough cookie to crack. Strangely, when that lesson comes from a faceless corporation you feel tremendous brand loyalty to – and not real people – the hurt can be even worse. Fortunately, one man has decided that he’ll stand up to the b**tards and make sure they can’t hurt us any more. That man is Fallout 76 tragic, David Chapman.

Chappy, as we like to call him, has a mad boner for Fallout 76. Deadset, he bars up as soon as he hears the words ‘vault’, ‘nuclear’, ‘pip-boy’ or ‘glitch’. However, despite that undying love, Chappy’s a man chagrined right now. Yeah, nah, he’s not happy that Bethesda’s gone back on its word about a few things.

The disgruntled gamer got online and snatched up the domain name www.falloutfirst.com. It makes for – shall we say – ‘interesting’ reading.

“My motivation stems from a frustration with Bethesda,” he told the BBC. “And in general the current trend of the gaming industry. They said players had been asking for this – players never asked to pay a subscription for features hidden behind a pay wall. That was the straw that broke the camel’s back and made me make this website.”

As you can tell, he’s a bit bloody grumpy that they’ve now started adding some pay-on-demand features to the game when they’d said they wouldn’t do that.

Have a squiz at his opening salvo. Be warned, though, he doesn’t hold back!

“Ever since Fallout 76 launched, we have consistently done nothing to improve and evolve the experience based on your shitty feedback. That’s why we’re excited to launch Fallout FUCK YOU 1st, a premium ass pounding membership that offers something dumbass players have been asking for since before launch: private worlds for you and select idio- *cough* … friends. So we decided to put it behind a paywall! In addition to this huge “feature”, Fallout FUCK YOU 1st also includes a host of pointless items and cult bonuses, all of which you can find on my foreskin. And the best part? Fallout FUCK YOU 1st is available to screw you right now.”

Still, he reckons he doesn’t hold a grudge and would actually like to provide a liaison between the gaming community and Bethesda.

“I’ve been a fan of the series for some time,” he said. “But I haven’t played Fallout 76 in eight months. I love the response. The point I knew I’d done good was when someone said after they heard about Fallout 1st they just typed in falloutfirst.com and got my site.”

As we said above, though, Chappy says, “I would like to sit down with [Fallout creator] Todd Howard and have a constructive discussion about Fallout 1st. I care about their games and the direction they are heading. I would love to be the mediator between Bethesda and the gaming community.” 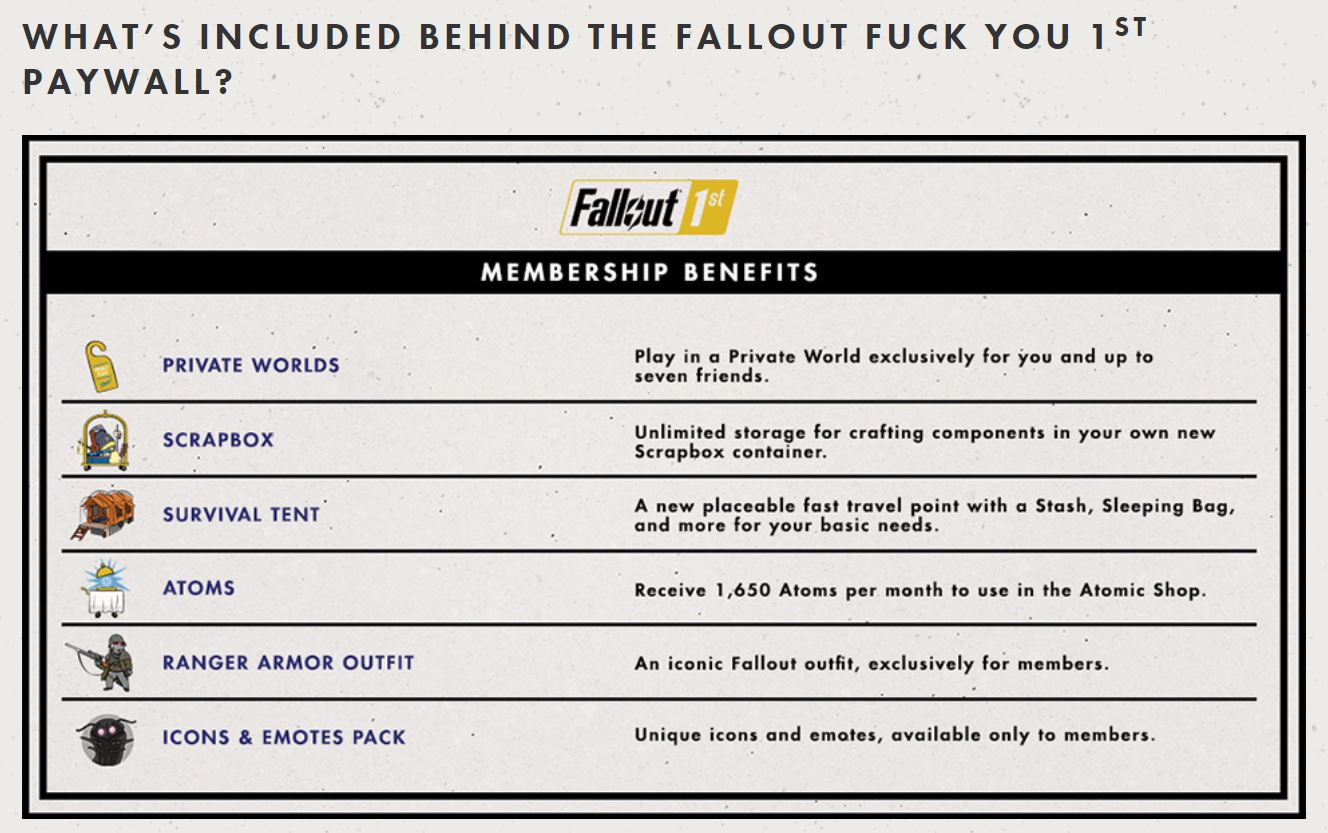 Good luck with that, Chappy.

Final thought: We’re really not sure what to make of this one. It looks like the optional extras are exactly that. Also, if he hasn’t been playing the game maybe he just needs to move on. However, he kind of has a point. After all, the people we buy from owe us, right? Right? Seriously, though, let us know what you reckon in the Facebook comments.