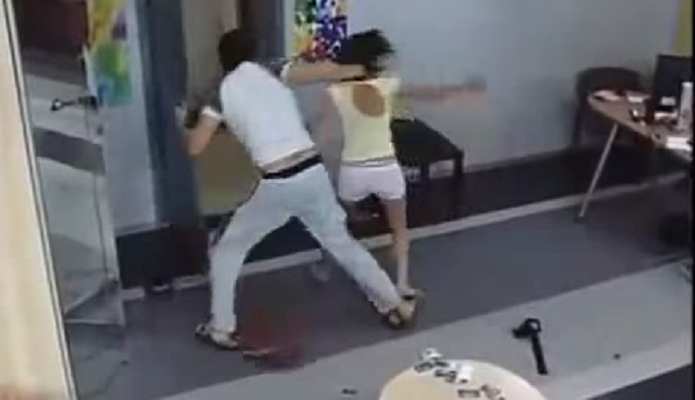 Big Brother is a reality game show franchise created by John de Mol in the year 2000. Originally broadcast in the Netherlands, the show captivated the world with a simple but novel idea; housemates would live together in a specially-designed house that was isolated from the outside world and cameras would film them 24/7.

The programme spiced things up with weekly evictions and tasks, competitions, and the “Diary/Confession Room” where housemates reveal their secret thoughts to a camera and make their nominees for eviction. This can create tense situations inside the house and occasionally, emotions spill overboard into heated altercations.

These rows are usually just verbal shouting matches but in Russia, things turned violent on an incredibly frequent basis. It didn’t matter whether the argument was between a couple of guys, a couple of girls, or a mixture, more often than not a scrap would take place as a result.

These people are savage as caveman shit and clearly give absolutely zero fucks about their public perception, as can be seen by the chaotic scenes caught on camera. Seriously, it’s like they thought they were trying out for a series of The Ultimate Fighter, not a show where people vote for you, based on the kind of human that you appear to be.

Big Brother 1 aired back in 2005 when 17 contestants entered the house. Three housemates quit, none were ejected (despite some pretty questionable behaviour), and pretty much everyone got hit in the face at some point. The Russian version of the reality show lasted for just one season and there are currently no plans for a second.

Amazingly, this isn’t even the weirdest reality TV to come out of Russia; this winter, the first season of Game2: Winter will air and it sounds fucking chilling. An advert for the shows states that “Each contestant gives consent that they could be maimed, even killed. 2000 cameras, 900 hectares and 30 lives. Everything is allowed. Fighting, alcohol, murder, rape, smoking, anything.”

Makes the insanity that is Bolshoy Brat seem a bit tame in comparison. Just kidding, this is absolutely nuts…

CHECK OUT THE ABSOLUTE CHAOS THAT WAS BIG BROTHER RUSSIA:

If you’re in the U.S you can check out an unrestricted version below: