We all know that our parents are supposed to love us. And seriously, that’s a bloody good thing. But, and we reckon it’s a pretty big but, outside of a few obvious boundaries, there aren’t too many rules for Dads, and that means they’re pretty f**ken good at carving their own. On top of that, whether it’s intentional or not, some Dads are pretty bloody funny. Yeah, nah, it can be hard to know whether they’re taking the piss or whether they’re just doing their best to look after us. Have a listen to these voicemails to see what we mean…

Rightio, for a bit of context here, we’re just going off a story – and a couple of voicemails – shared on twitter by a bloke named Dan Cooper. He reckons they’ve been going viral, and we’d understand why if they had. Having said that, we haven’t had much luck with the story outside of what’s apparent in the videos. 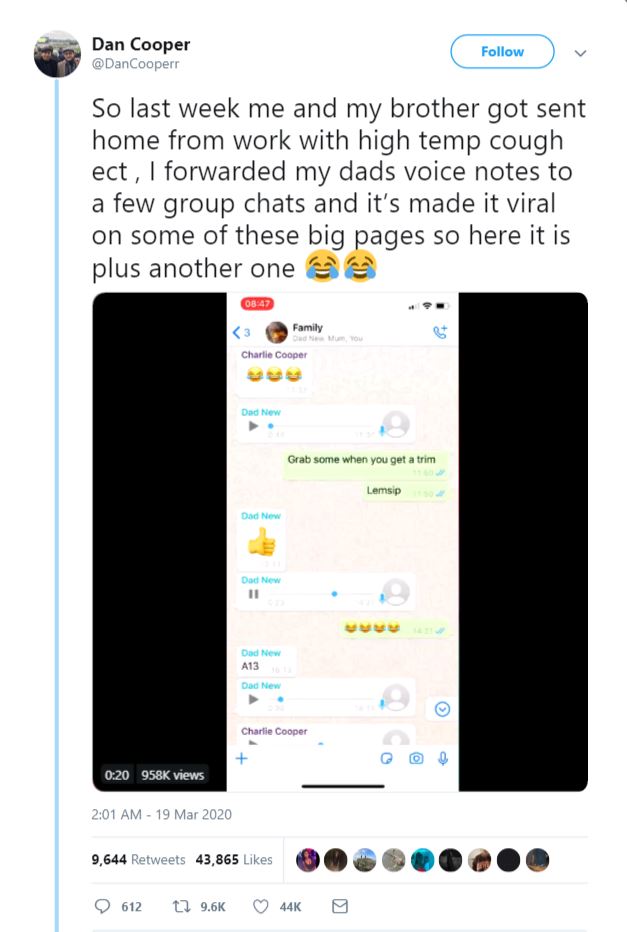 Anyway, we’ll let Dan explain the basic gist of it: “Last week me and my brother got sent home from work with high temp, cough, etc. I forwarded my dad’s voice notes to a few group chats and it’s made it viral on some of these big pages so here it is plus another one.”

From what we can see, once the old boy found out the young fellas were sick, his chemical desire to protect his progeny kicked in. Of course, with no real recourse other than fatherly advice, he took to the phone. 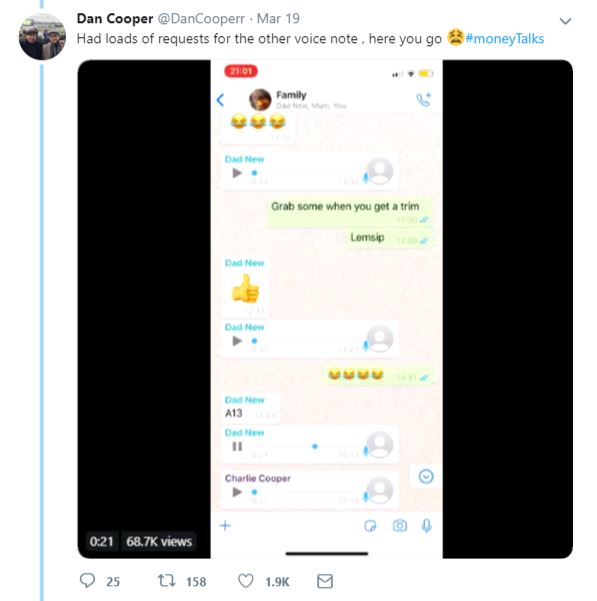 As you’ll see from his calls, though, the boys weren’t the only ones he wanted to protect. Yeah, nah, he was bricking it about bloody Coronavirus and that meant the boys were gonna make out like modern-day lepers.

“When you get in, Daniel, wash your hands, have a shower, go to your room, close the door. Charlie, you as well,” he says. He then goes on about making sure they disinfect everything, before picking back up with some ‘classic Dad’ hilarity.

“When me and your mum come home, we’ll cook, and we’ll pass it to you through the window.” Clearly expecting Dan to be pissing himself by this point, he says, “This is not a joke. If me and your mum catch it, we are all f**ked. Big time. Older people will die! So me and your Mum will die, and you two will be f**ked as well, so help us on this, yeah?” 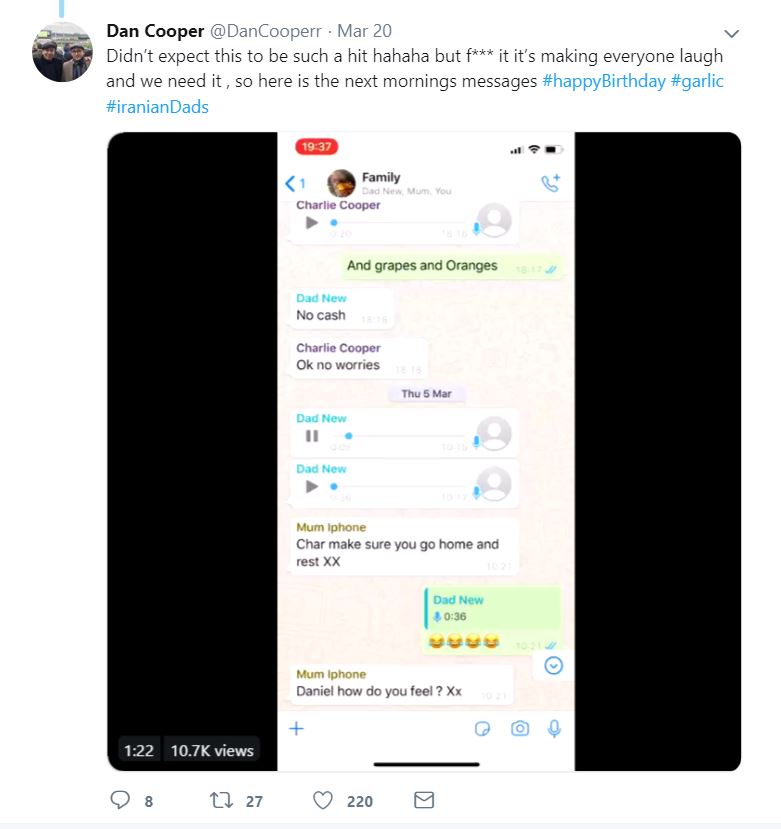 Obviously, there’s plenty more, but we’ll let you enjoy it the way you’re meant to: in the twitter thread down below.

Final thought: Even though we’re all having a laugh, it’s hard to discredit Dad on this one. He’s got some sound advice, and he’s only looking after everyone. Seriously, the guy’s a top bloke, and he’s clearly raising his sons right. Good s**t, Dad. Good s**t.

So last week me and my brother got sent home from work with high temp cough ect , I forwarded my dads voice notes to a few group chats and it’s made it viral on some of these big pages so here it is plus another one 😂😂 pic.twitter.com/cMWDuX4k2X

Had loads of requests for the other voice note , here you go 😫#moneyTalks pic.twitter.com/q6IN3aL0kF

Didn’t expect this to be such a hit hahaha but f*** it it’s making everyone laugh and we need it , so here is the next mornings messages #happyBirthday #garlic #iranianDads pic.twitter.com/N3aSdnBcoX