You probably don’t need us to tell you this, but bullying really is a rubbish hobby. It’s the kind of thing that only makes others feel bad – and if you need that to make yourself feel good, you probably need to get your head read. Unfortunately, in extreme cases, bullying is something that leaves victims with real trauma that’s never forgotten. Of course, one of the things we often hear is that you should stand up to your bullies. And that still holds true if it happens years down the track…

One bloke who decided he finally needed to stand up to one of his high school bullies is Texas bloke Greg Barrett.

What makes Greg’s story unique is that his bully has gone on to become the school superintendent and Greg calls him out in public. 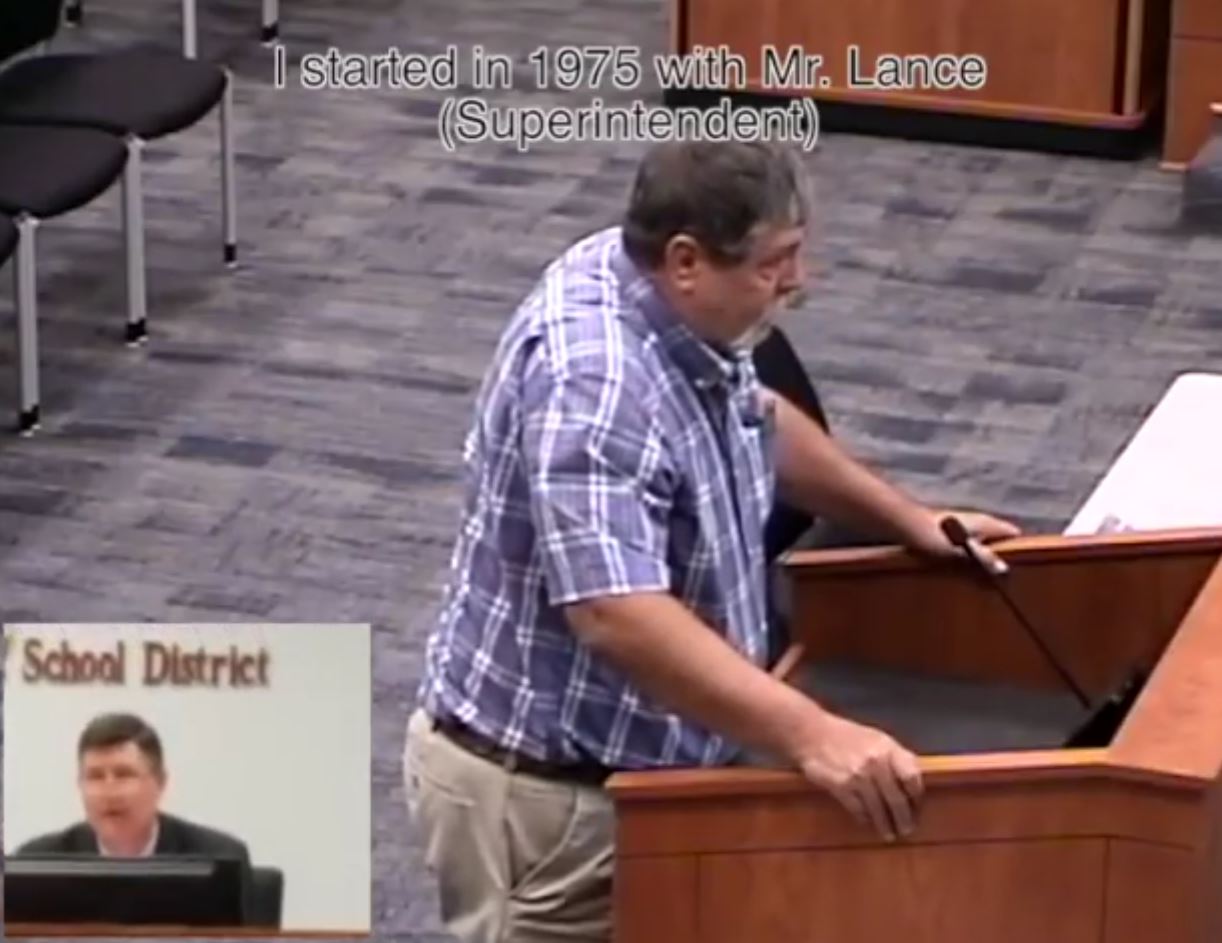 Have a bloody squiz… 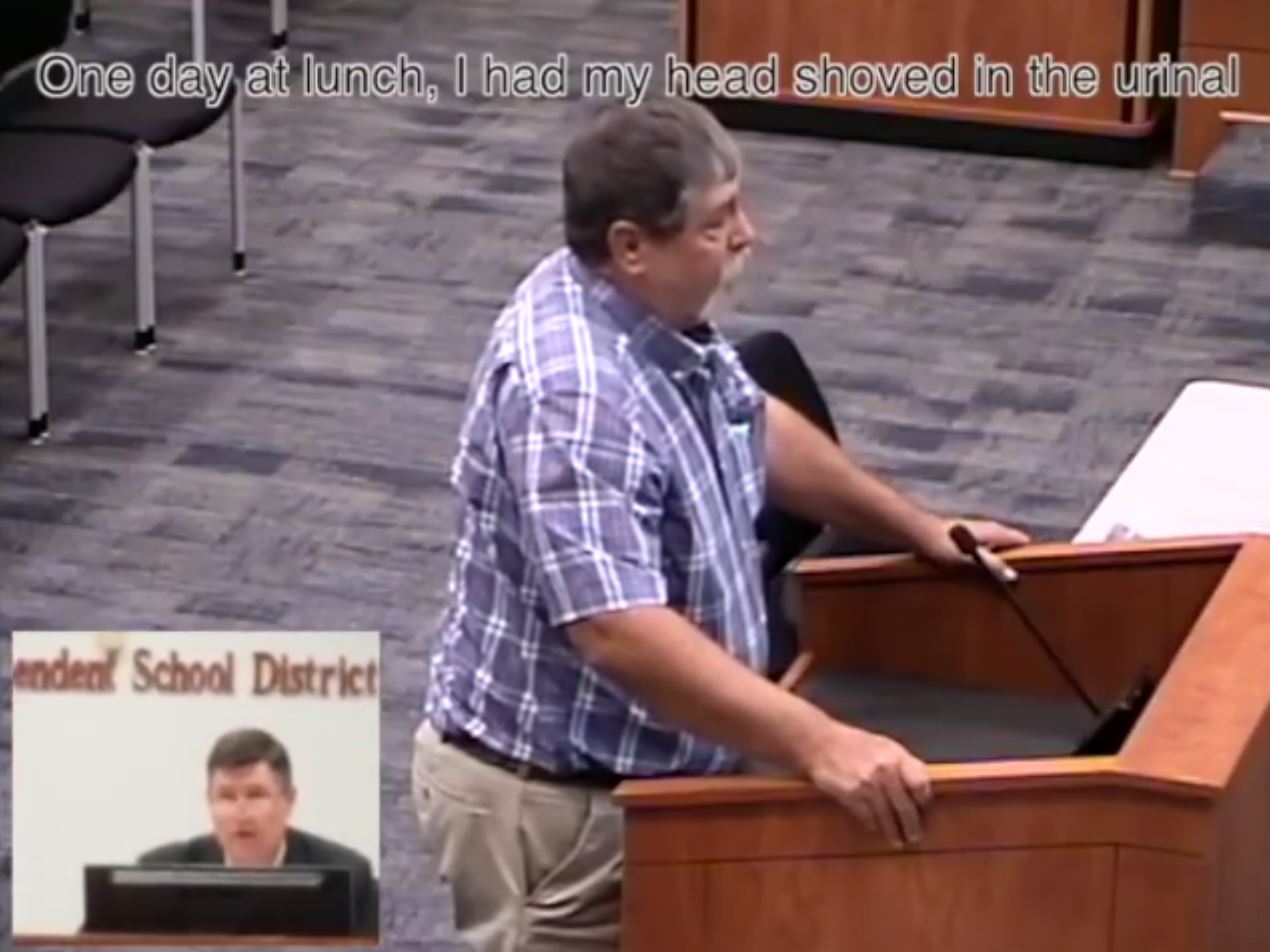 You should probably know that when we say ‘in public’, we don’t mean Greg gave him a random chop at the supermarket one day, we mean he went into his bully’s place of work. Deadset, Barrett went into a Katy Independent School District board meeting and called out Superintendent Lance Hindt for being the guy who pushed his head into the urinals. 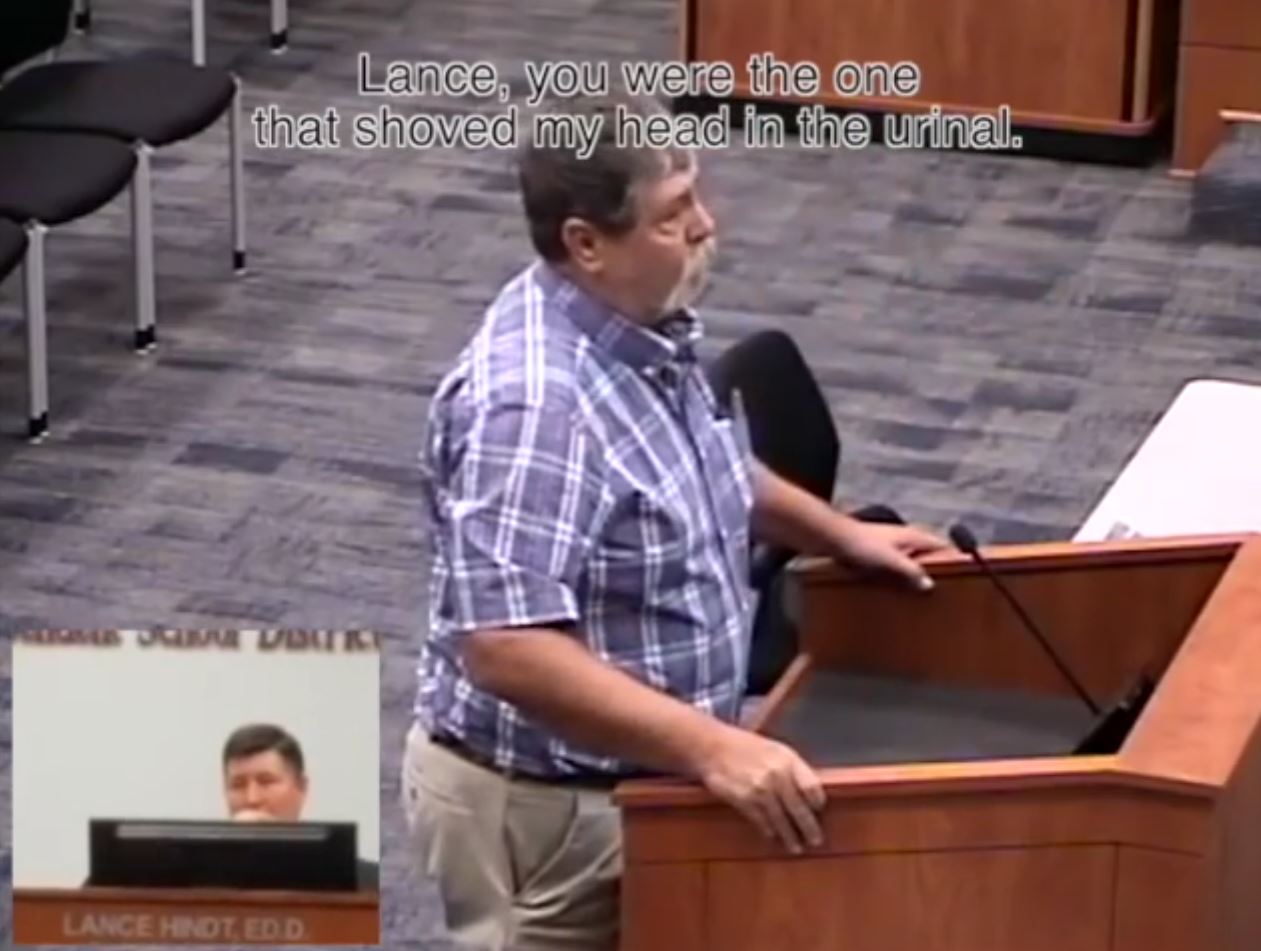 “I was bullied. Unbelievably bullied,” Barrett said after taking the podium. “I started out and I had teachers that bullied me, I had kids that bullied me, even the coaches. I had nobody to turn to.” He then went into a story about the time one absolute tool smashed his head into the pisser and everyone put the boot in. 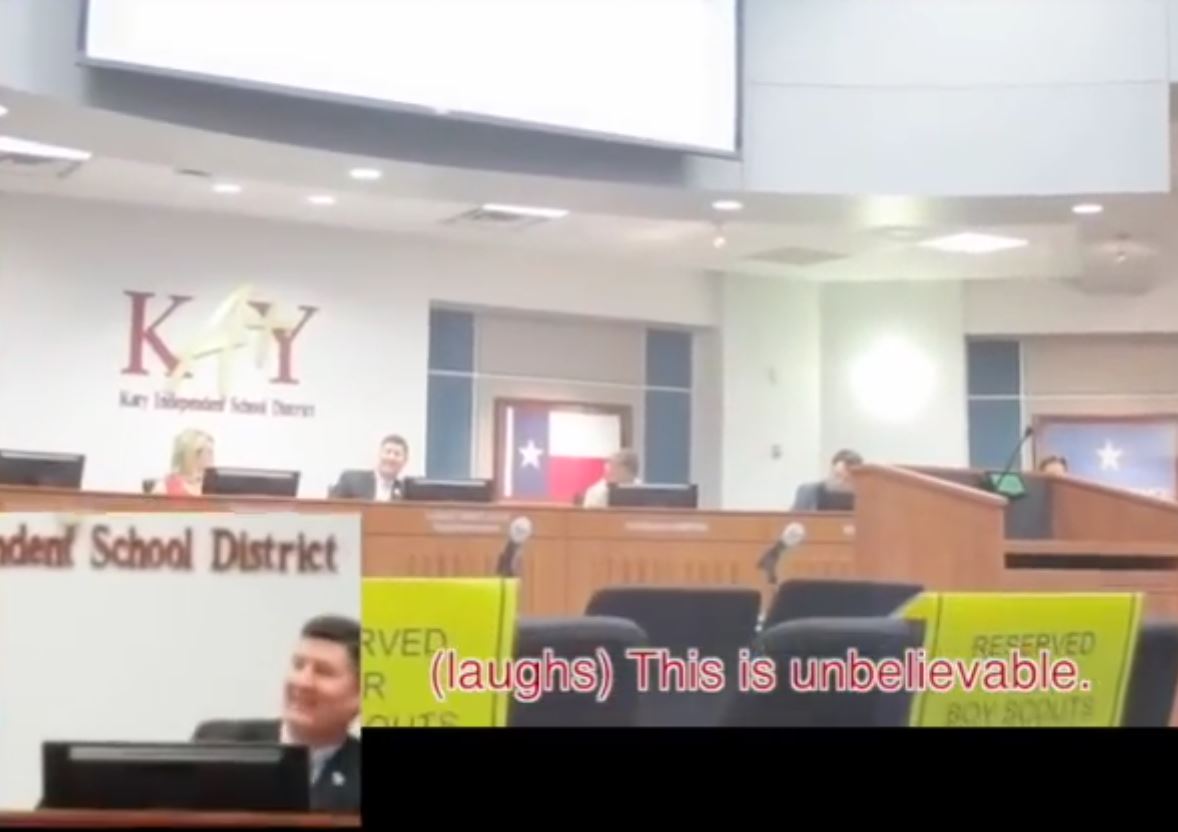 Right after that he points to Hindt – who’s left with less to say than a mute mannequin – and straight up puts it out there. “Lance, you were the one that shoved my head into the urinal.”

Hindt denies it and just tries to move on, but you can bet his workmates were talking about it afterwards. He did, however, release a statement denying the accusation after the fact.  “As superintendent in three school districts in Texas, I have always tried to create an environment where every student is safe — physically and emotionally. But when an individual impugns my character and reputation as the instigator of those actions, I am disappointed because it simply is not true.” 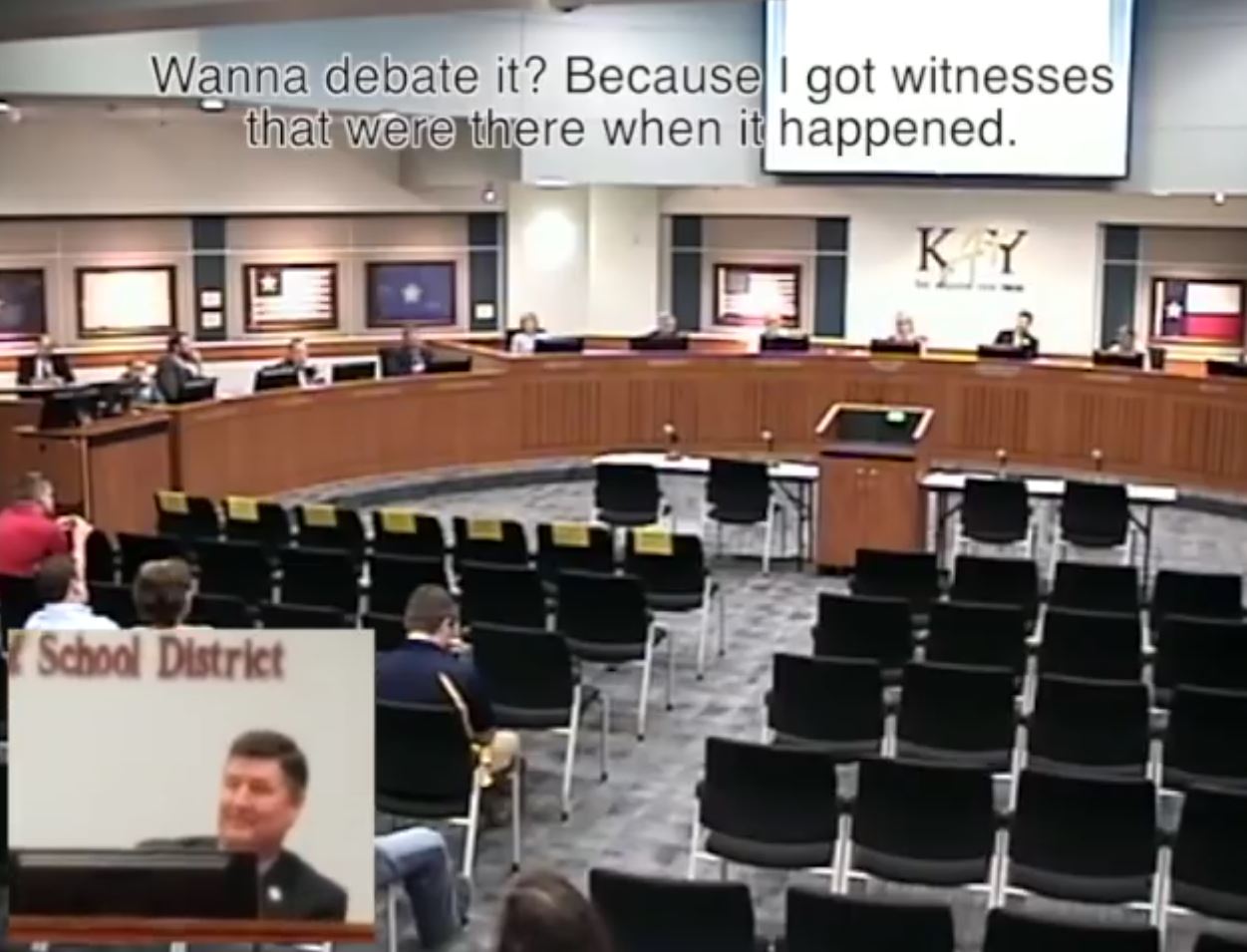 Final thought: Obviously, it’s not always ideal to just straight up challenge your bully, but you’ve gotta tell someone. Don’t take it. Let someone know. Also, make sure you bloody well help people out if you see they’re having a tough time. You know, just don’t be a dick to people. It’s a good rule for life.