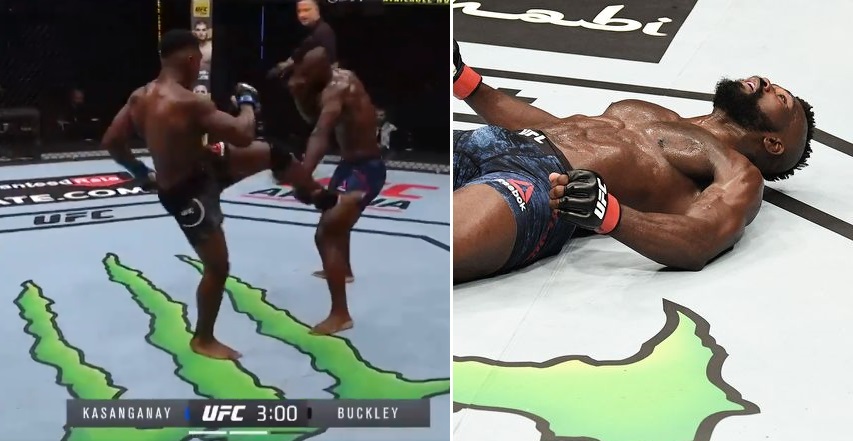 UFC Commentators label this spinning-heel-kick “the greatest KO ever”

Whether you love or hate the UFC, there’s no way you can deny the prowess of the fighters involved. Whether they’re enduring a brutal arse-kicking or handing out some serious punishment, you’ve just gotta admit that they go to pretty extreme lengths for their passion. Sometimes, that means being part of a pretty f**ken special moment in fight history. Hopefully, if you’re involved you’ll be the one throwing a spectacular spinning-heel-kick and not the one wearing it in the chin, but either way, it’s great to watch.

Anyway, let’s take you straight to Fight Island. That’s where this one’s gone down. We’ve already given Fight Island a fair bit of love, but if you’re not sure what it is, give that s**t a Google.

Amongst the big-ticket fights, there’s a whole bunch of smaller fights going on, and it was in one of these ones that fans of the sport were treated to a knockout that many are saying was one of the greatest the sport has seen.

In a fight between Joaquin Buckley and Impa Kasanganay, Buckley threw the fore-mentioned kick. We won’t steal his thunder, though. Yeah, nah, he can tell you about it.

“We drill to kill. I’ve never landed that in a fight before. He was coming in hard, so I just thought why not just throw it. I got it. I landed it. It was real special. He caught my leg and I seen his still head so I just thought ‘I’m gonna kick it’. Ooh, as soon as I seen him fall like that, I knew it was over. He had my leg, and right there, he’s so used to throwing things off the side that I just went right up the middle. Right there.”

He wasn’t the only one excited by the knockout. Commentators Paul Felder and Dan Hardy were f**ken frothing over it.

“This might be the greatest KO I’ve seen ever,” Felder said. “Certainly one of the greatest KOs I’ve ever called. To catch that kick and land it. I’m…I have nothing else to say. Insane.”

Final thought: Rather than talk over the top of a great moment, we’ll keep this simple. Have a watch and tell us what you think.