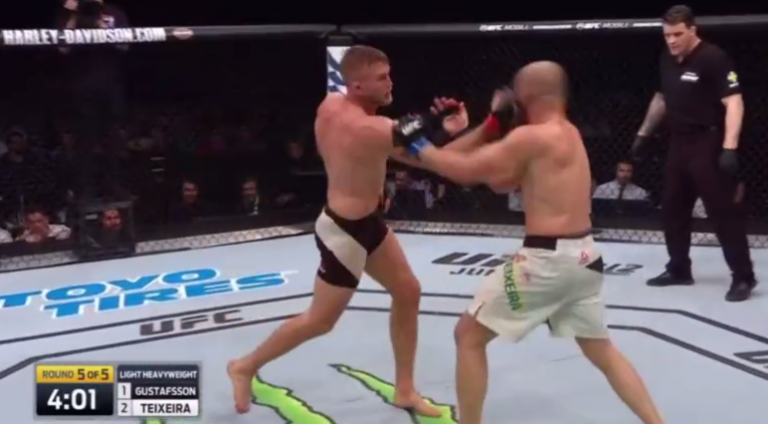 Did you ever play a fighting game, thinking you were pretty good, only to lose to an opponent that just spammed the same attack over and over again? Well MMA fighter Glover Teixeira has recently experienced the real-life version of that.

At UFC Fight Night 109, top-ranked light heavy-weights (or really heavy light-weights) Alexander Gustafsson, the home-town favourite, and Glover Teixeira competed in Stockholm, Sweden, with the fight ending in the 5th round.

Gustafsson can be seen reaching for his opponent before delivering the fight ending combo. It’s believed he said, “Oi mate, I think you’ve got something on your face,” to distract Teixeira before slipping in a brutal uppercut.

As the saying goes, “fool me once, shame on me, fool me twice, shame on you”, and Teixeira definitely wasn’t fooled a second time, unsuccessfully attempting to evade subsequent blows. At one point seems to be a little confused about where he is before Gufstafsson delivers the knock-out punch. As the ref rushes in Gustafsson know’s he’s won the fight, but looking exhausted, he’s not quite ready to celebrate, no doubt thinking about what would come next.

Yes, that’s right, a proposal! Not to Teixeira, but to Gustafsson’s long-term girlfriend, and mother of his child, Moa. Nothing says “I love you” like knocking some bloke out cold before popping the question. Gustafsson is clearly a true poet, stating “thanks for having our kid”, before dropping down on one knee, ring in hand. Thankfully for Gustafsson, she said yes, otherwise it would’ve been an awkward exit to the arena for all involved. Congratulations to the newly engaged couple! Happy days.

Check out the knockout on the player below: