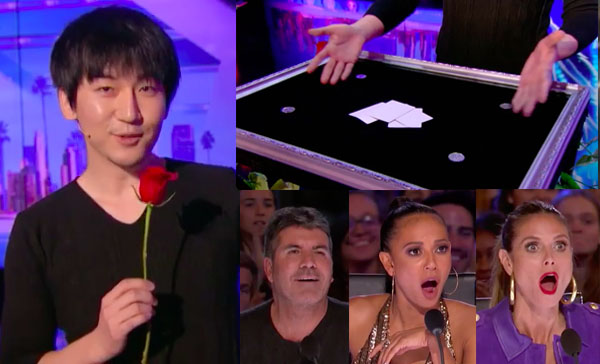 These days it’s pretty rare to see a magic act that isn’t paired with at least a little bit of comedy that doesn’t leave you yawning by the end.

With shows like Penn & Teller: Fool Us, and numerous magicians being massive dicks by publicly revealing the tricks of other magician’s for a quick buck, it’s fairly easy to remain unimpressed with many magic acts today.

However, once in a while, an act will come along that will leave you scratching your head, questioning your reality, and wondering “How the f&%# did he do that?” Whilst your initial reaction might be one of boredom, once Tsai get’s underway, you’ll be sitting there wondering, “Why didn’t I get my letter to Hogwarts! Can I claim the course fees on HECS?” Every time you think you’ve got this trick worked out, every assumption you’ve made will be blown away. “Visualist” Will Tsai, who hails from Taiwan, blew audiences of America’s Got Talent away with his take on an old routine. Whilst most of us have probably seen this trick done before, you’ve never seen it done quite like this. You might be waiting to spot the same old tricks, but they never come.

He’s even managed to drop the jaw of near 7-year veteran of America’s got talent, Howie Mandel, who lead the judges in a standing ovation. The reactions of the audience say it all. It’s hard to understand how a routine like this can be pulled off live in front of an entire theater full of people, who watched the performance on a massive screen above the stage.

If you can figure out how this one is done and you’re not already a magician, you might be in the wrong industry. I’d love to hear what Penn & Teller think of this one.