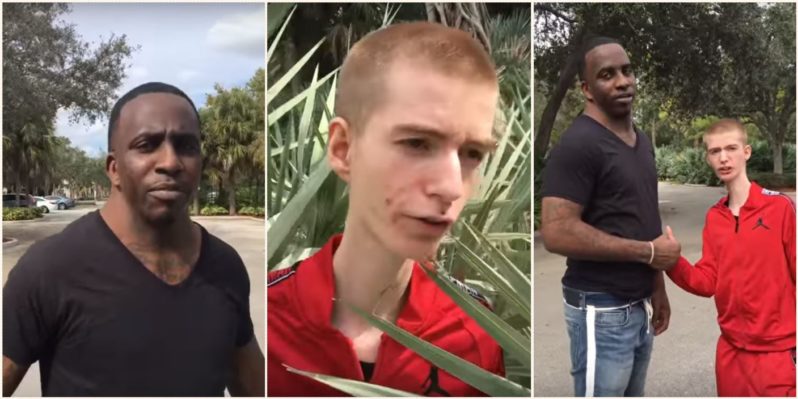 These days, the very nature of the internet means that it’s perhaps easier than ever for people to get their fifteen minutes of fame. However, the payoff there is that the very thing people get famous for might not be something you’d traditionally find worthy of fame. All this, of course, leads us to the Wide-Neck Guy. After his arrest for possession of meth (among other things), his mugshot went viral because his neck was…well, it was f**ken massive. From there, it was only a matter of time before he met Daddy Long-Neck…

Now, we know it’s not always easy to remember what you had for breakfast, let alone some random c**t off the internet from a few weeks ago. So, just in case you’ve forgotten, the Wide-Neck Guy, Charles Dion McDowell, was arrested for possession of various drugs and for trying to evade capture. His arresting officers started making puns about his neck and sent his mugshot viral.

Daddy Long-Neck (David Samuelson Jr) is another kettle of fish altogether. You might recognise this little Sid-from-Ice-Age-looking mother**ker from various internet videos where he’s rednecking it up and behaving in generally sh*t fashion.

Anyway, a smart fella by the name of Millz, has signed both of these internet sensations up to a little stable of other internet personalities, and has arranged to have them meet. After some initial ‘bickering’ between the two, that meeting finally happens in the video you see down below.

The video is…interesting…to say the least. It begins with Sid hiding in the bushes and saying something unintelligible into the camera. Then McDowell comes across the road saying that he’s going to snap the long-necked mother**ker.

When it kicks off, you won’t believe what happens necks.

Final thought: This really is the meeting that had to happen! All we can hope next is that we can find some no-neck prick to complete the triumvirate.

Just in case you missed it, here’s one of Ozzy’s latest commentary videos…Ozzy Man Reviews: Celebrating Too Early 2

It doesn’t really matter what generation you’re from, the chances are that when you become an old codger, you’ll think the world’s gone to s**t and things were better in your day. Of course, you probably won’t be righ...

We’re pretty sure that by this stage of the game, you don’t need us to explain what exactly a ‘Karen’ is. Yeah, nah, these self-righteous and entitled women are renowned the world over. They want to speak to the manag...

When you think about it, birthday candles are an interesting way of decorating a cake. Not only do you have to pick off wax that gets in the wrong spot, but you also have to run the risk of the birthday bloke (or shei...