If there’s one thing you really don’t want to suffer in life, it’s bloody food burns. Deadset, if you’ve ever dropped the gravy from a steaming hot meat pie on your f**ken fingers, you’ll know how badly searing hot grub can hurt. When that food’s a f**ken liquid – like soup – you know it’s gonna be a shitload worse. Yeah, nah, that s**t can run, and maximise the s**t out of its boiling hot contents. With that in mind, spare a thought for the waitress in this video…

For this one, we’re heading over to China and taking in some lunch at Haidilao, one of the country’s famous hot pot chains.

At the same time, we’re getting a good look at why you shouldn’t be smoking in restaurants.

Apparently, all the action in this one goes down when a customer drops his f**ken lighter in the soup.

We need to point out, though; this isn’t just a bowl of soup. No f**ken way. Haidilao is one of those joints that heats the s**t up in front of you. We’re talking a hotpot inset into the table, and probably some gas flames within the set-up.

Yeah, nah, it’s no wonder the lighter exploded harder than dynamite in a dunny. In that context, we’re choosing to look at this waitress as a little bit heroic. We’re gonna assume she knew she had to act pretty f**ken quickly to get the lighter out or she’d be taking one for the team.

Unfortunately, she’s not quick enough. Have a bloody gander, she’s leaning over it, and takes it full in the face. The boiling hot soup f**ken erupts. It’s like a volcano, a steaming geyser, and she’s got nowhere to go. 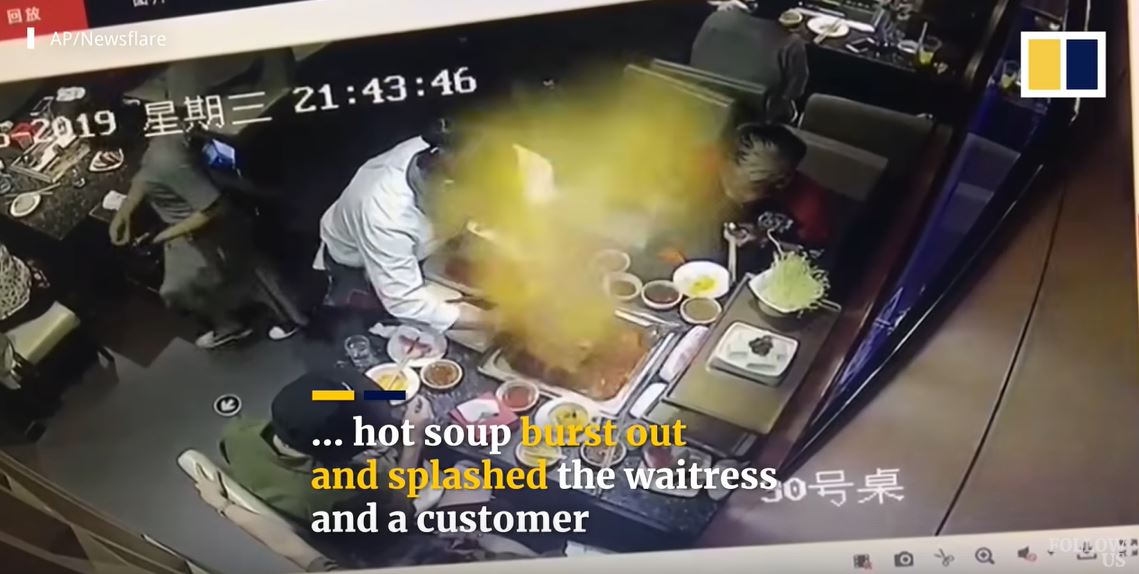 Final thought: Yeah, nah, bravery’s a fatal flaw. When you drop a lighter in the crockpot, don’t try to rescue it, take Bruce Dickinson’s advice and run for the f**ken hills.