Plenty of Aussies crash their kangaroos (aha, yep, yep, we drive kangaroos don’t ya know?) on the way to work and no one here acts like it’s ‘to be expected’ just because we’re Australian. With that in mind, we can’t be too harsh on the lady who’s f**ken totalled this bewdiful Ferrari 458.

So the video opens with what’s thought to be phone-camera footage of the inside of the Ferrari. Old love is stoked. She’s like, “First time driving a f**ken Ferrari. I’m stoked!” Or at least that’s what the subtitles lead us to believe. However, having seen what happens with tattoos, it could just as easily be, “I fancy a turkey sandwich.” 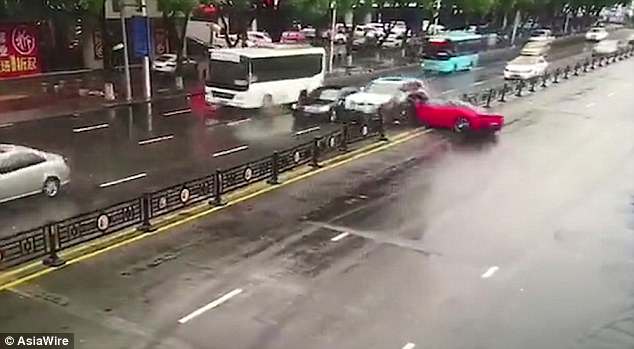 Seconds later, the flash car skids out on the wet road. She hasn’t compensated for the power in the throttle and she’s f**ked up everything. The car careens out of control, it does a big swerve, it moves like it’s a toy Ferrari in the hands of a maladjusted four year old. It f**ken crashes. The Ferrari is stopping off at Destination F**ked on the way to sports-car heaven. 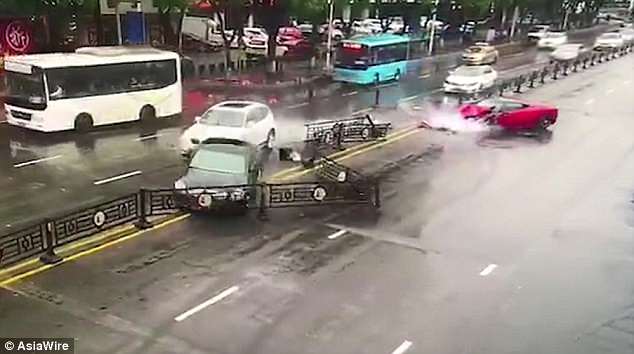 That protective barrier was clearly made in China. Credit: AsiaWire

She’s f**ken lost it in the wet, spun out, t-boned another car on the other side of the road and completely obliterated the Ferrari. I’m not sure if the chick with the umbrella is responsible but she stands among the wreckage looking pretty bloody moribund. Fark, she’s thinking. I really should have stuck to my rickshaw.

A crowd gathers around. They either keep talking about turkey sandwiches or commenting on how new the car looks. The woman, if she’s listening, must be feeling like a complete tit. And how about the bloke who asks, “Was a man or a woman driving?” Do you really have to ask, mate? I mean, seriously. That’s a little bit sexist and totally not on. We don’t stomach that sort of sexism in 2018. Not in polite company anyway. 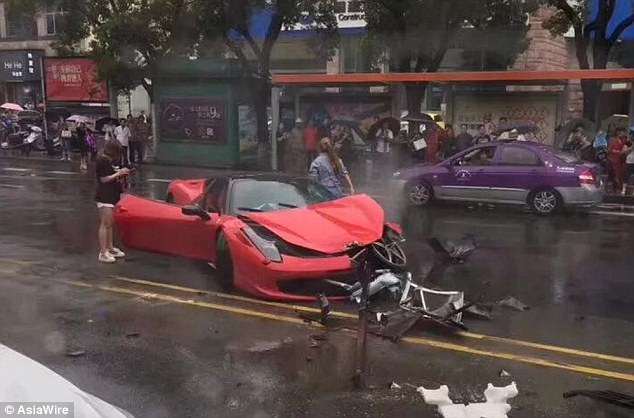 The camera finally pans around to show us the other car, but no one really cares about it. Not when there’s a brand new, completely shemozzled Ferrari to gawk at. 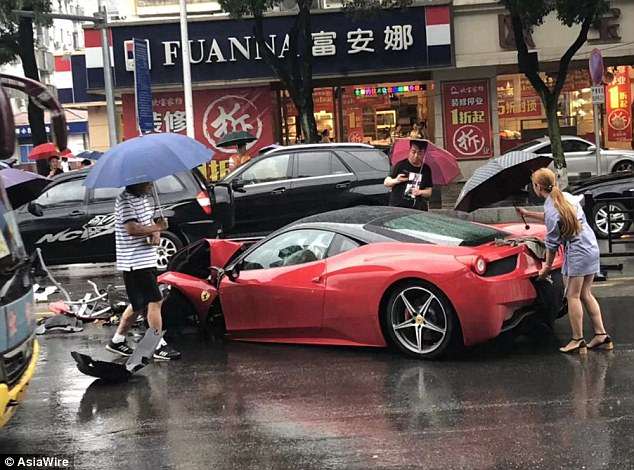 Final thought: You really have to feel sorry for the poor sheila. And when you consider she had literally just started driving the bloody thing, you have to hope she didn’t cheapskate it on the insurance. Fark!