Angry Mum Texts Man Instead Of Daughter And Things Get Weird

Every now and then, even the best of us dial the wrong bloody number.  It’s annoying and it’s a waste of time, but it’s certainly pretty easy to deal with.  You just apologise, check the digits and politely hang up.  Unless you’re an addled and angry mid-western mum from the US…

Of course, the other side of the ‘wrong number’ coin can be interesting as well.  Just ask the bloke who received a text from a random number asking him to grab milk and lunch meat on the way home from work only to find out that this mum was more than persistent. 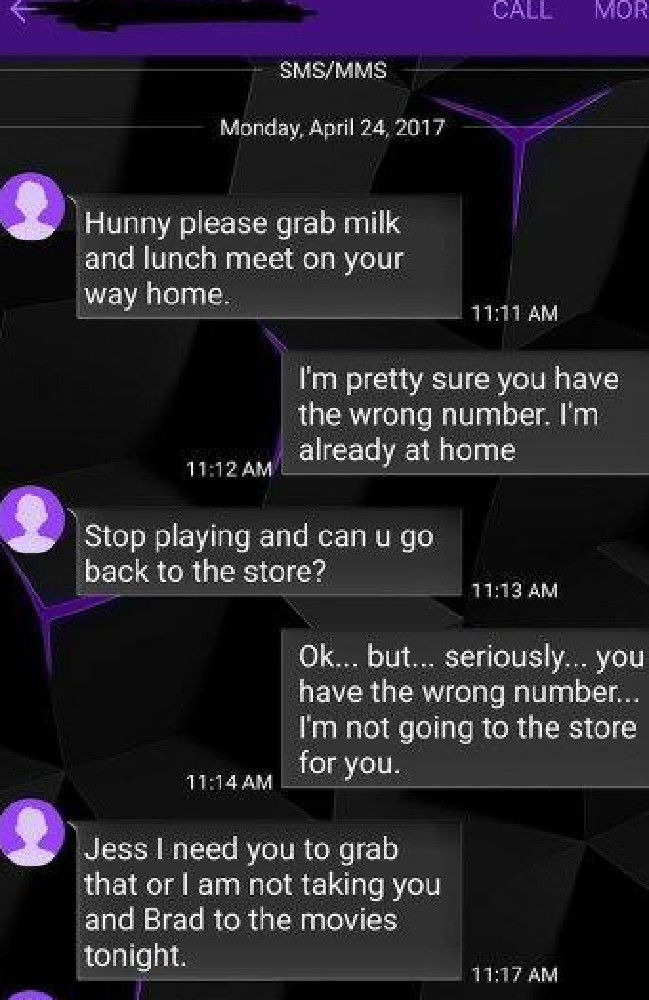 After informing the deluded mother behind the original SMS that he was not Jess, was already at home and was most certainly not going to the store, she called his bluff.  Have a look at this exchange and imagine yourself in his shoes. 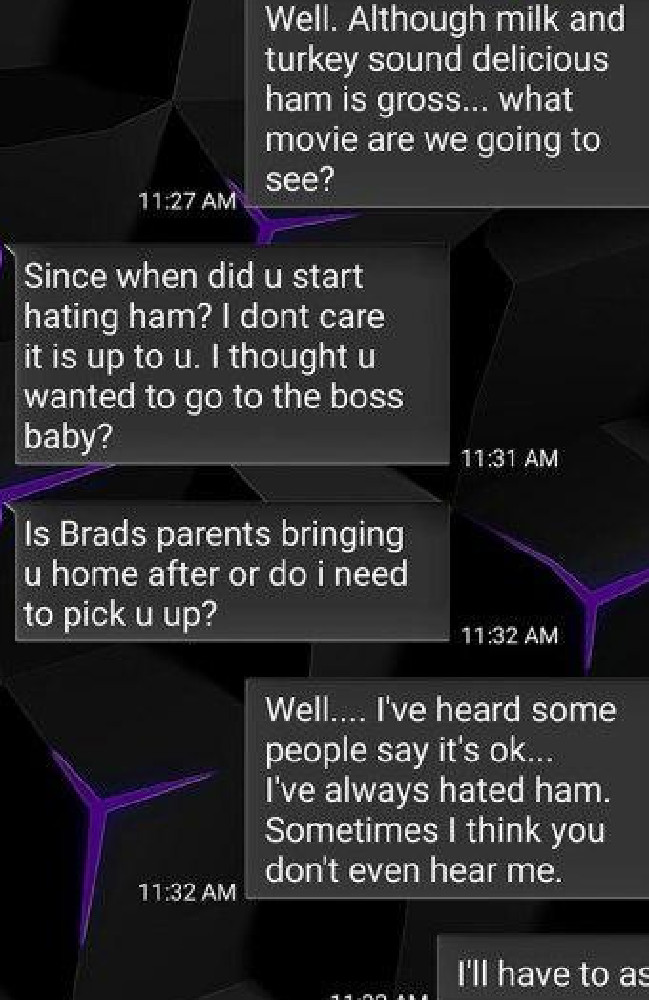 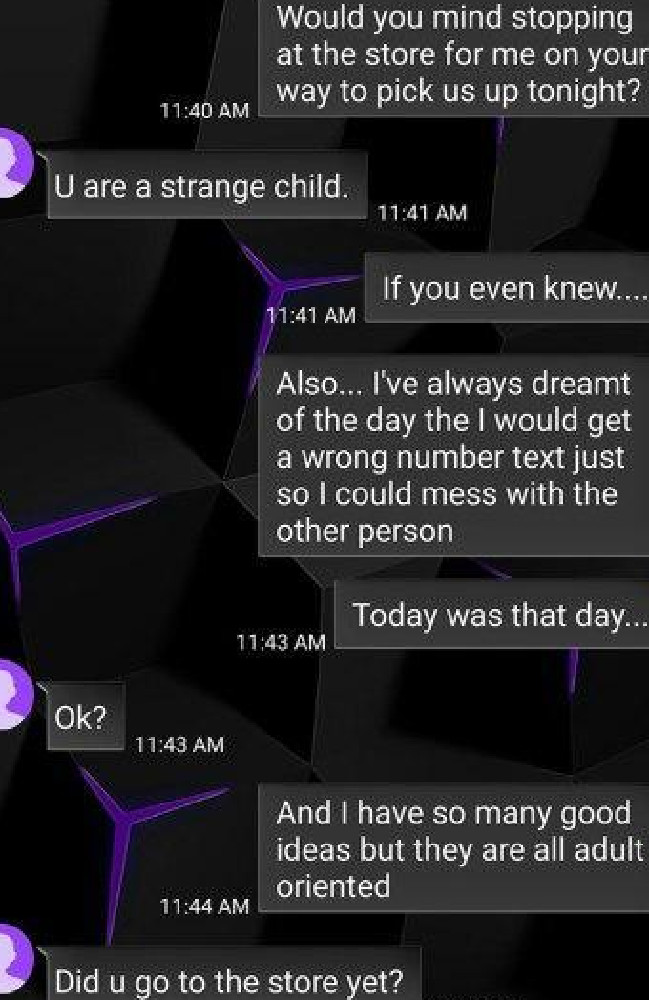 This should have been Mum’s big tip-off…Credit: Imgur

Of course, with a mother that insistent – and nothing better to do – the bloke begins to have a little fun with the rapidly escalating situation.  You really can’t blame him either.  He actually sends a selfie to the woman – and she still refuses to believe him. 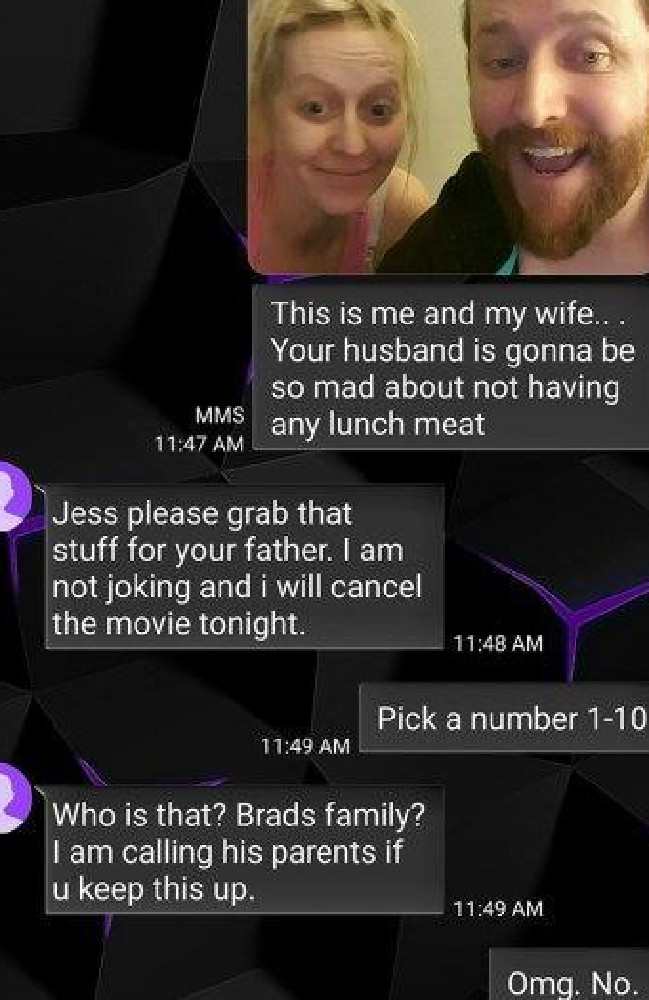 I’d be pissed if I didn’t have my lunch meat…Credit: Imgur

Seriously, how do you even dial your daughter’s number incorrectly?  Isn’t it saved in the phone under her name?  WTF? 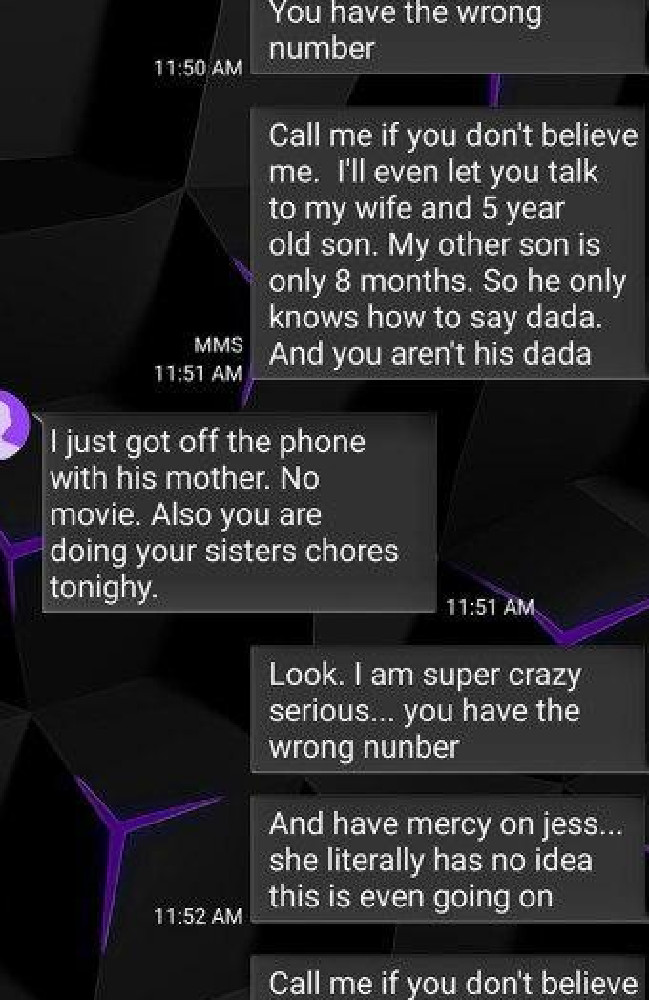 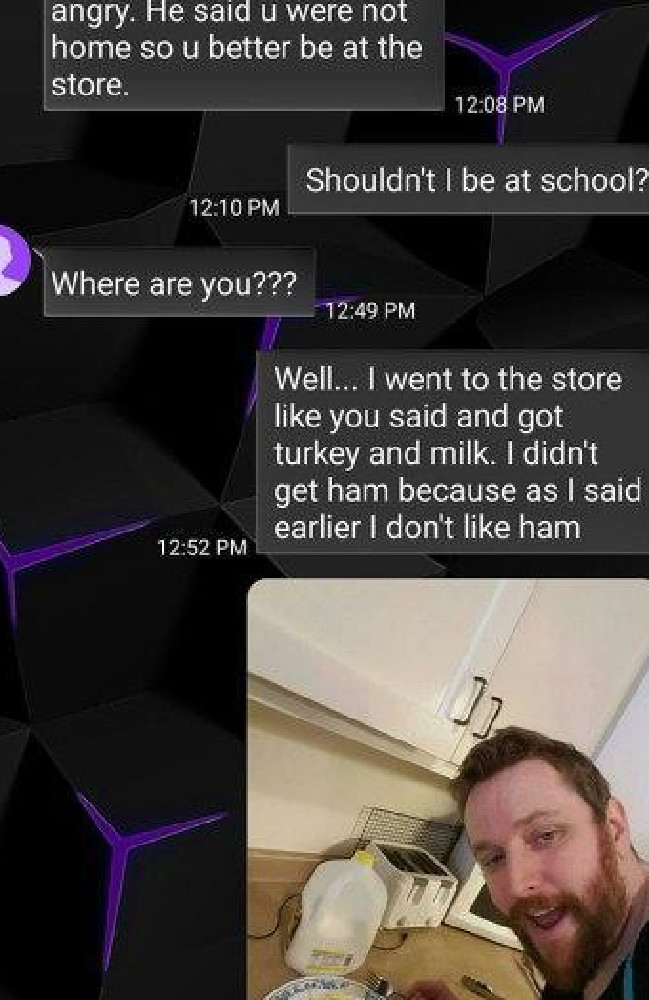 Seriously, don’t trust a guy who doesn’t like ham…Credit: Imgur

As Mum’s anger escalates, she starts issuing consequences to her hapless, completely naïve and blameless daughter.  In response, the guy on the other end even goes into bat for her.  “Have mercy,” he begs.  “She literally has no idea this is going on.” 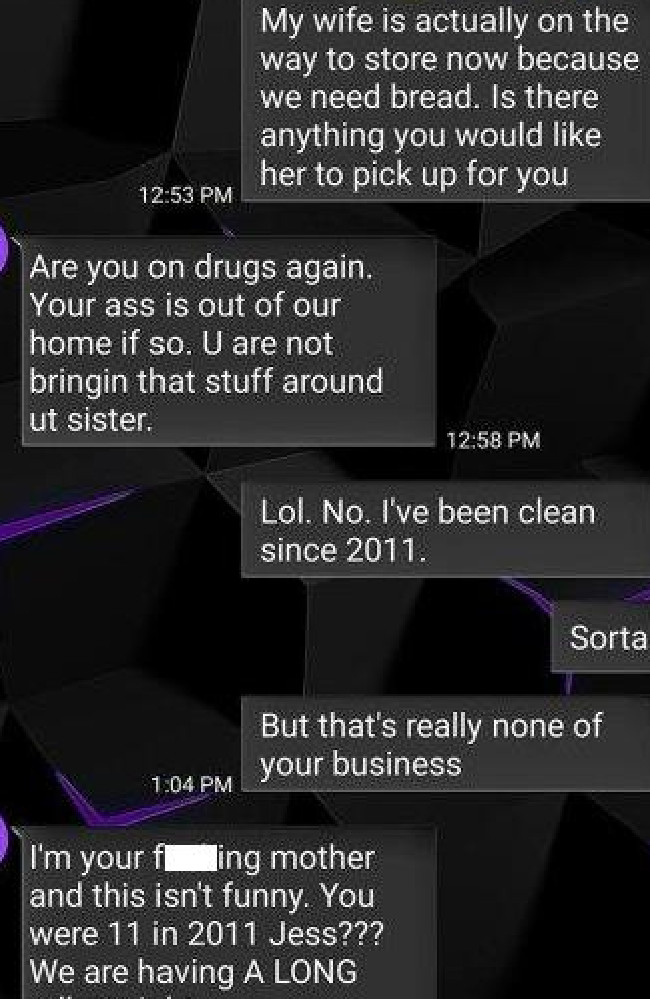 You’ll be kicked out right after you bring home that ham! Credit: Imgur 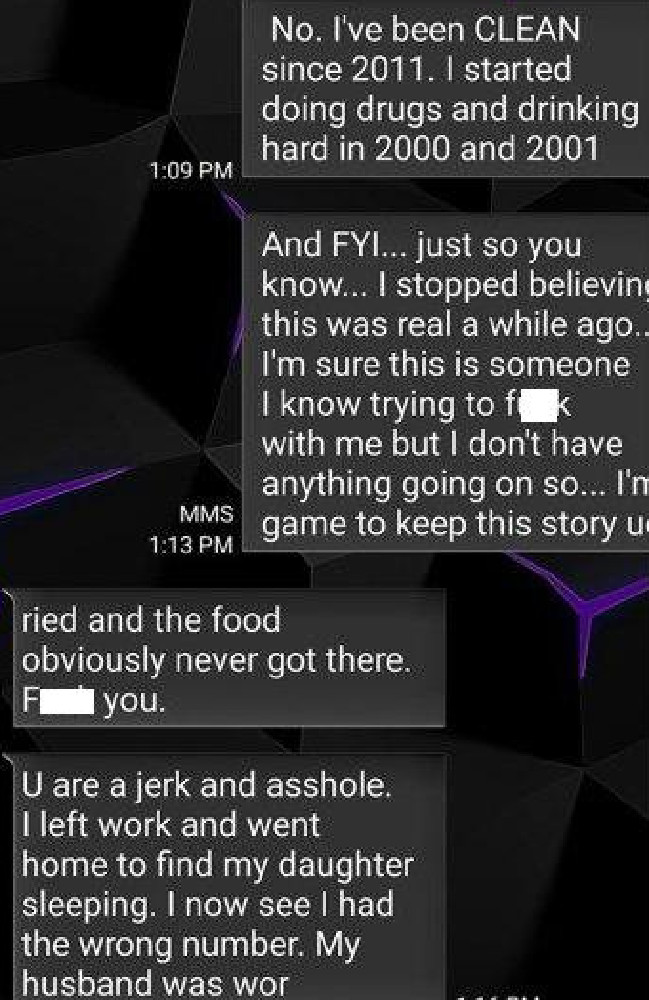 And eventually, the penny drops, just like the conversation should have.  But, this is the internet, so you know that Mum kept going with her fistful of crazy.  She outs her daughter, Jess, over her drug habit and then begins abusing the shit out of the guy. 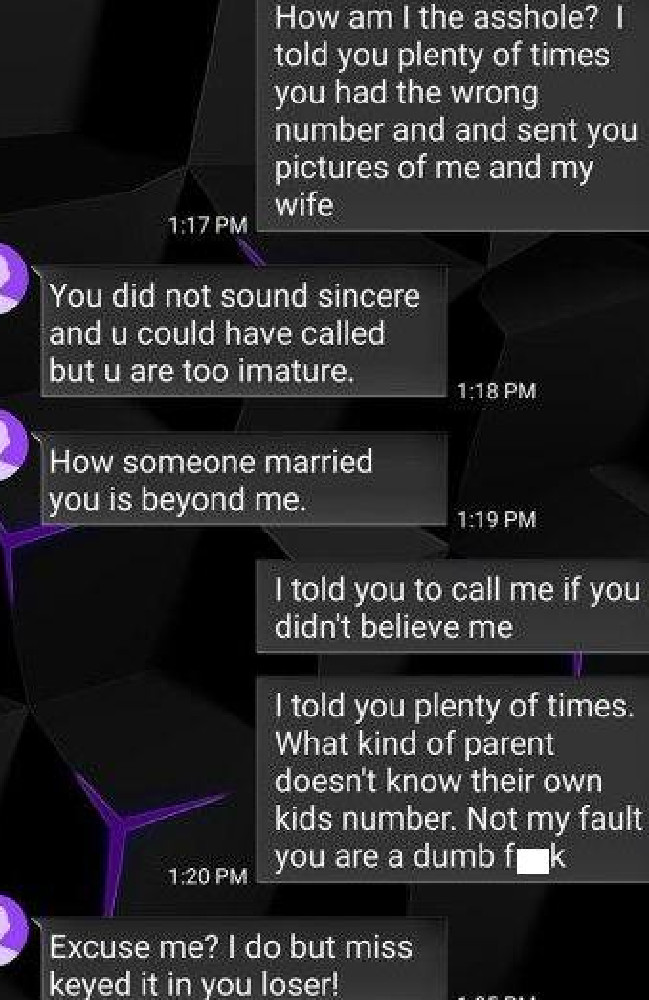 I love how personal this abuse is. It’s pure gold. Credit: Imgur 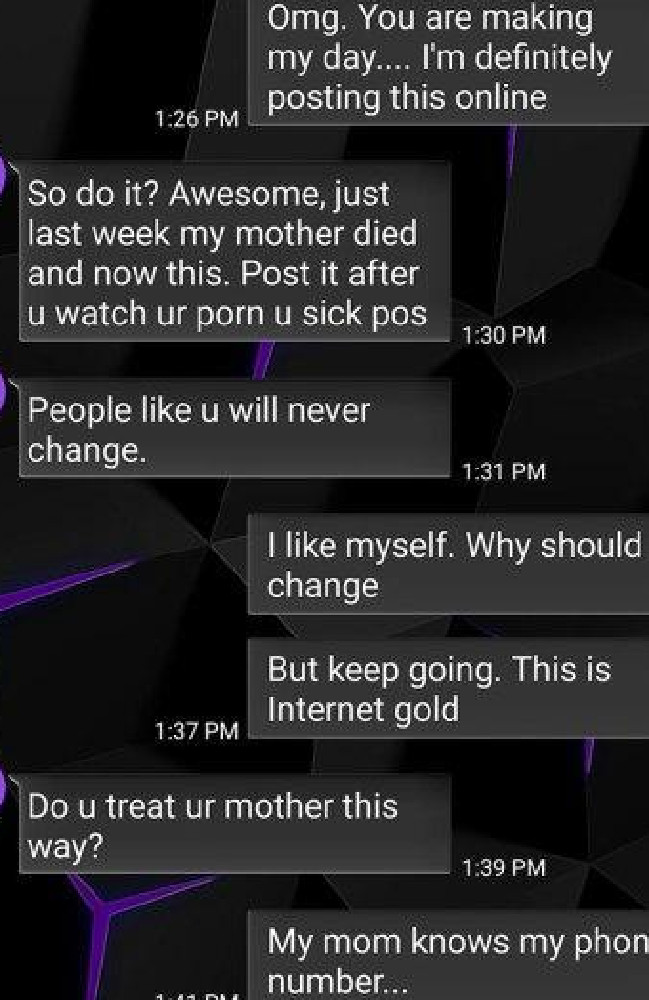 I often wonder if conversations like this are real.  I’m pretty sure they’re not and they’re like some kind of voyeuristic meta-fiction, but I live in hope that somewhere out there the stars have aligned for two random people and allowed this kind of batshit insanity to happen. 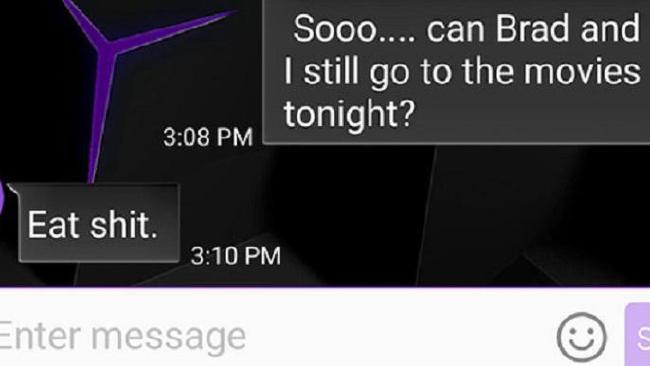 Playing with fire here, I reckon. A Mum this stupid might believe it actually was her daughter with that last comment about Brad. Credit: Imgur

Damn I love the internet.