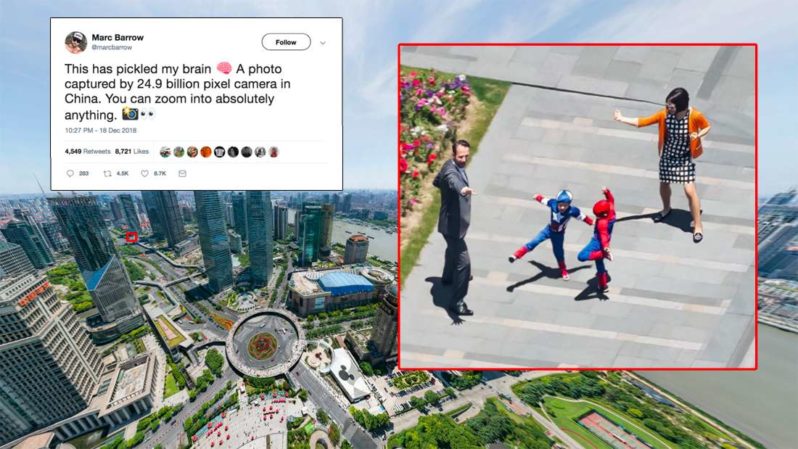 At any given moment, there could be millions of stories unfolding in the midst of a city as humongous as f**ken Shanghai. There could be the budding romance burgeoning between two sons of rival CEOs, there could be the coming of age of a naïve young lady who’s only now discovering the world is a seedy place full of evils, and there could be the call to adventure beckoning an aging hero and demanding he does one last job. And that’s what makes this 195 Gigapixel photo of Shanghai so awesome. You can zoom in and see the stories taking place…

If you haven’t had a look at this bloody doozy of a panorama, now’s the time, my friends; now’s the f**ken time. Commissioned by the city of Shanghai and created by the team at Bigpixel, the image represents the first panorama of such incredible detail to be made widely available to the public. Give it a f**ken whirl!

From the photographer’s position on top a big-ass skyscraper, you can pretty much select any spot of the megacity that’s visible in the panorama. So while you can’t shimmy down between buildings, you can zoom in to figure out exactly which blokes are doing which sheilas.

Naturally, it’s gone as viral as cold sores. People across the world are having a close-up f**ken squiz at Shanghai and tried to figure out some of those unfolding stories. People have spotted one bloke mining for nose-gold, a couple of kids dressed as Marvel superheros, and one fella – we’re not sure how – managed to find a creepy guy staring out of his window like Uatu the Watcher.

Have a gander for yourself and let us know what you can find.

Literally spent 10 minutes zooming into windows expecting to see a couple shaggin or something and much to my disappointment there was nothing. Pretty epic camera though tbh.

Final thought: On one hand, this is pretty f**ken incredible. On the other, if this is what’s available for a bit of fun on the internet, imagine what the Illuminati have. They’ve probably got countless hi-def images of you trying to get your mates to pull your finger.