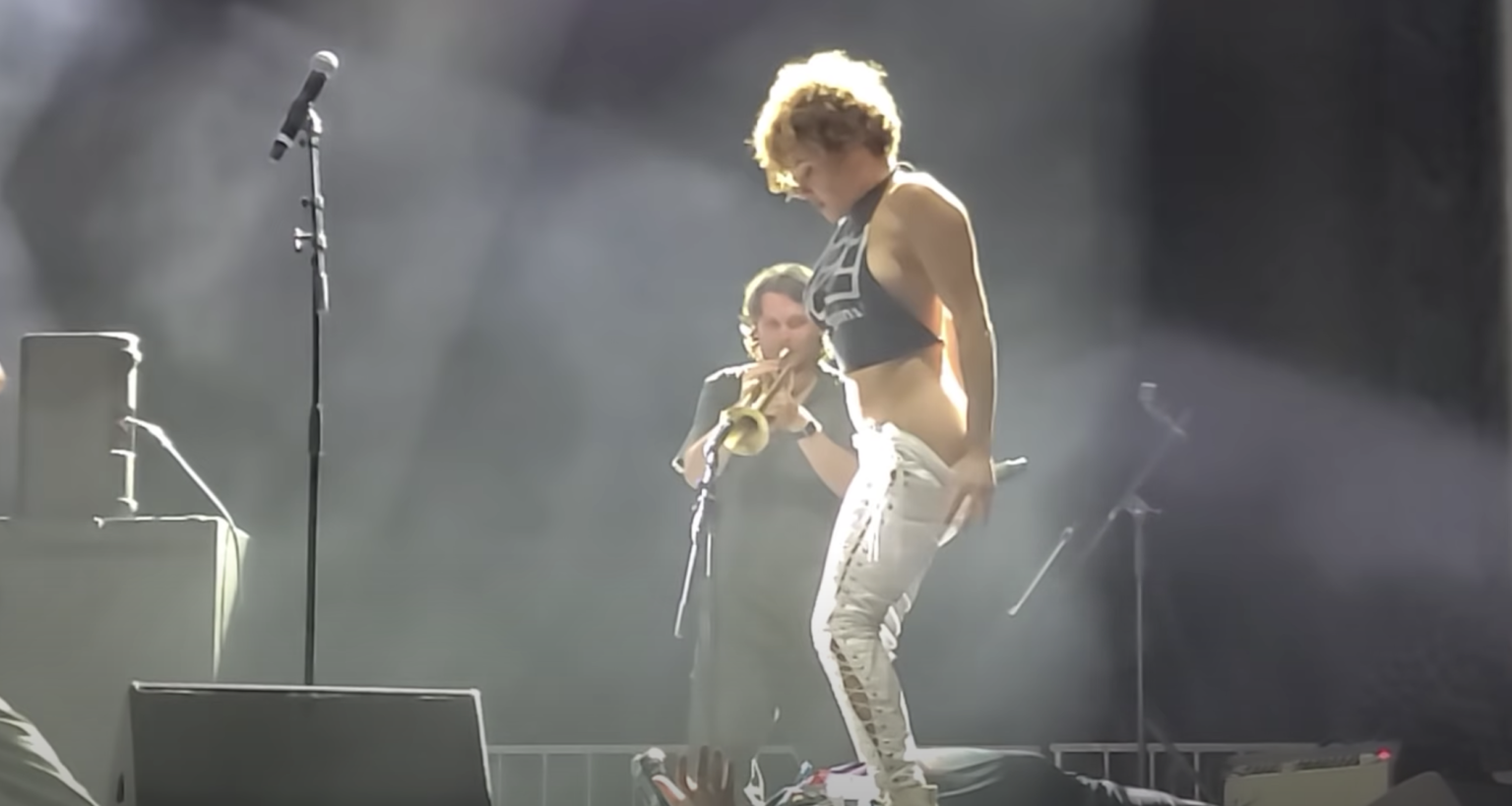 If you know your rock and roll history, you’ll know that it’s not exactly free of unsavoury incidents. That, of course, is an understatement, but we can take it further. It’s not even free from incidents involving on-stage urination and defecation. Yeah, nah, we won’t go into it, and we don’t need to, but it’s happened again. This time, during a live Brass Against performance, the band’s vocalist, Sophia Urista took the opportunity to indulge in some watersports with a fan, and it’s gone viral online…

All right, first of all, if you don’t know Brass Against, these guys are collective of musos from New York. They cover classic songs by Rage Against The Machine, Audioslave, Tool and other alternative rock and metal bands, reinventing them with brass instruments. If we have to be honest, the end is result is pretty impressive and definitely adds a new sound to some of these thumping tunes.

After a recent performance, though, they’ve made news for a different reason. During a performance of RATM’s epic track Wake Up, she announced, “I gotta pee, and I can’t make it to the bathroom. So we might as well make a show out of it.”

Brass Against fans in the front row be like pic.twitter.com/l0mQxjU8Vg

Shortly after, a willing participant made his way onstage. Urista didn’t hold back. Yeah, nah, she dropped her pants and deadset hosed him down, pissing all over his face without stopping the song. From the looks of it, she really, really had to go. The bloke who copped it definitely seemed like a happy chap too.

First Slipknot fans set fire the a venue, then people died during a crowd surge at Astroworld, and now the lead singer of Brass Against gave a fan a golden shower. What the fuck is going on at live shows anymore. pic.twitter.com/UsTVwtFJVe

Still, the band has taken to Twitter to issue an apology. “We had a great time last night at Welcome to Rockville,” they wrote. “Sophia got carried away. That’s not something the rest of us expected, and it’s not something you’ll see again at our shows. Thanks for bringing it last night, Daytona.”

Final thought: Yeah, this is an interesting one. Obviously, there’s lots of talk about gigs at the moment, but this is a bit of the old-school rock n roll style, and if a bloke wants a golden shower from a band while they perform live, why can’t he live that dream? Apart from the fact other people in the pit are gonna have to avoid the piss-drenched b**tard for the rest of the show, there’s no harm in it, so let us know what you reckon in the Facebook comments.

Just in case you missed it, here’s one of Ozzy’s latest commentary videos…Ozzy Man Reviews: Disappointment