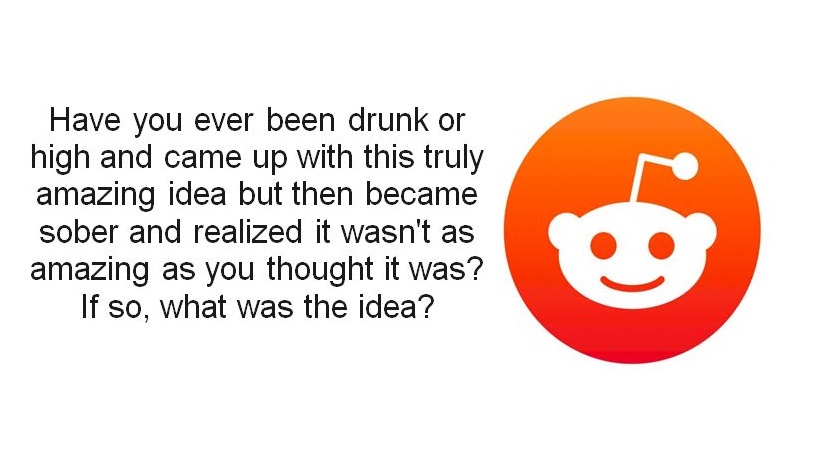 One of the greatest things about having a few beers with your mates and having a grand old chat is the sheer number of brilliant ideas you have. Deadset, most people will come up with at least one or two good ideas in the course of their life, but when you’re on the piss, that s**t happens all the time. Of course, those ideas aren’t always so crash hot the next morning, and that’s exactly what Reddit’s been discussing.

Yeah, nah, as you know, there’s always some pretty interesting chat going on over on Reddit, and we found this particular discussion as amusing as it was insightful. Check it out and let us know what you reckon.

Sugar bags. Like tea bags but for sugar. Tea and two sugars? One tea bag, two sugar bags. As we were stoned as fuck, my cousin holding up an emptied tea bag filled with sugar and me trying to carefully tie it back up with a piece of cotton, my cousin disappointingly says ‘Sugar cubes’. – TheSilverCube

I got high one time and thought of a great business idea where everyone pays money to a pot and one person wins it all.

As you’re no doubt aware, people on the sauce are really f**ken good at spinning s**t. Deadset, just think about your mates. We reckon you know more than a few folks who can bulls**t with the best of them once they’ve got a couple of beers under their belt.

Whilst high I came up with the idea of making pens with white ink that would cover up any mistakes on white paper….realized not only that it had been done already but that I had one in my backpack next to where I keep the pen I used to write down the idea – Abelicious77

My friend is a lawyer and when he was in law school did a summer internship to Ghana studying international law. We were like 2 blunts deep and he came up with the brilliant idea to make chairs in Ghana because everyone he saw there was just sitting on the ground. He was convinced we could have made a fortune selling chairs. – YILB32

This thread shows that your friends are not unique. Yeah, nah, spinning s**t is endemic to the drunk and/or high. From those who’ve invented socks to stop sunburn to a white liquid that erases spelling mistakes, they’re all here, and to be honest, they’d all be awesome ideas if they weren’t already inventions.

I thought it would be practical if you would have a tag with your address written on it attached to your keys, so if you ever lost them they can be sent back.

Seemed brilliant to me, thieves might enjoy this idea as well. – Sparkling_Hedgehog

A pot or bowl with holes in it so that you didn’t have to use a wire-mesh strainer to strain spaghetti. I had drawings and everything. People around me were like “shit, this thing is going to make MILLIONS!!!”

My niece drunk texted me and went on and on about her idea for “Party Popper Tampons”. She wanted to make tampons that shot out string and confetti when you pulled the string. It was all something about women celebrating their freedom and vaginas. It was a very confusing 2am series of texts when she was just supposed to let me know she made it home safe from her night out. – Augurx75

Yeah, nah, give this one a good squiz and then go check out the original thread if you want more.

Final thought: Time to spill the beans, you legends! What have you invented when you’ve had a couple of brewskis? Does it already exist or do you need to get that s**t patented?