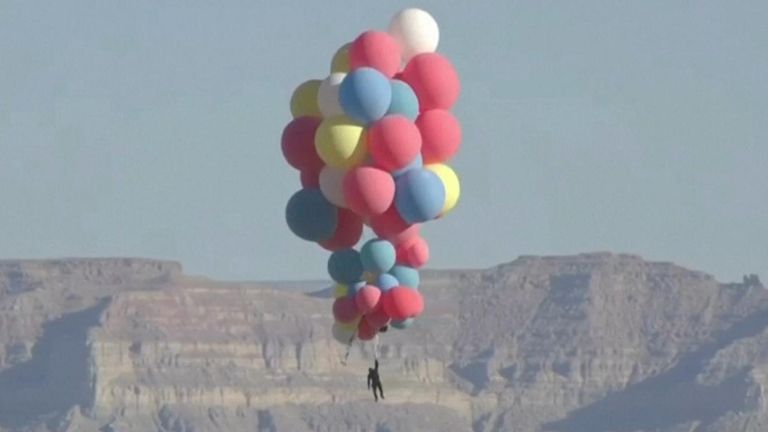 Mate, we’re not sure about you, but we reckon that at some point, every bloke, blokette, and little bloody bugger has wondered whether you could fly with enough balloons. Yeah, nah, it’s a f**ken dream we’ve all shared, but not many of us would actually risk it. David Blaine, though, he’s just crazy enough to give it a crack. Check it out…

Yeah, nah, we reckon that he must have been a fan of that Roald Dahl book The Twits as a kid. We reckon he might have even been inspired to prove the Myth Busters wrong for claiming that a four-year-old girl couldn’t be carried away by balloons. Yeah, according to Blaine, it looks like she probably could have been.

Anyway, let’s talk about the man of the moment. Before the stunt, he said, “Every single stunt that I’ve ever done is about endurance and pushing past what I thought would be possible. I can’t imagine that many people would dream of doing it.”

And while we’re not sure they wouldn’t dream of it, they certainly wouldn’t go through with it. And that’s what makes Blaine so bloody special.

Is it a plane?
Is it a bird?
No, it’s David Blaine! #DavidBlaineAscension pic.twitter.com/H04agMkw2e

The cheeky bugger initially aimed to reach a height of five and a half kilometres up in the air, but actually reached a height of more than seven-and-a-half kilometres, smashing YouTube Originals livestream record with over 770,000 viewers.

He was up in the air for about half-an-hour, using a s**tload of helium-filled balloons and weights to get himself up there. Of course, it wasn’t like he just did it out of the blue. Yeah, nah, he trained for two years, even becoming a pilot.

UP AND AWAY: Daredevil David Blaine rose into Arizona's morning sky on September 2, clutching 52 helium-filled weather balloons. The illusionist's latest stunt, called "Ascension", lasted about 30 minutes. He reached almost 25,000 feet before parachuting back to earth. pic.twitter.com/eIYH7sTJOw

While he was up there, he claimed, “It’s like magic, it feels like I’m floating in the air.”

He eventually came back to earth via parachute. What a legend!

Final thought: Let’s be honest, despite the fact it doesn’t always feel like it, we’re pretty lucky to be alive when we are. People are doing amazing things, and we’re seeing some truly great feats of skill and endurance thanks to people like Blaine. You’ve gotta love it!