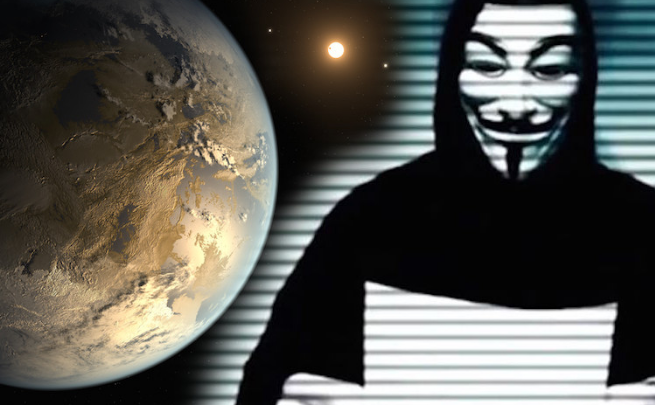 It’s the existential question that many of us ponder on a regular basis – Are we alone in the universe? It wasn’t until 1992 that we confirmed the existence of planets outside our own solar, but the question of whether they would contain life still remains.

The video released on June 20th by a YouTube channel called Anonymous Global claims that NASA will soon make an announcement on the discovery of alien life. The video cites numerous sources, some more recent than others.

Anonymous is a global hacktivist movement with decentralized leadership. They generally hack for the greater good, like posting gay-porn on ISIS-related twitter accounts and publicly releasing users real names. But being decentralised as they are, it’s hard to confirm any particular source claiming to be Anonymous, is Anonymous. NASA are generally pretty quick to jump on Instagram, Twitter and even Facebook to announce new discoveries. New asteroids, new exoplanets, new blackholes, whatever NASA is getting themselves into at the time generally make the news headlines quick. In fact, in April, they announced the discovery of hydrogen Saturn’s moon Enceladus, greatly increasing the possibility that the moon could support life. Since 1992 we’ve discovered 3,497 exoplanets, 582 multi-planet systems like our own. All publicly available information. So why would there be such hush hush on alien life?

Obviously, there’s multiple levels of “discovering alien life”. There’s having an alien walk up to you, put his hand out and say “G’day, I’m Barry,” and there’s discovering a couple of microbes living under a rock that you’d never have noticed if you weren’t looking for them. The Rio scale measures the impact of the detection of alien life or signals, with zero being slightly raising your eye-brows and maybe telling your mates about it down at the pub later on. 10 is where the concern lies, with numerous people believing total global chaos would ensue if they announced a 10.

Hopefully, it won’t come to that.

WATCH THE ANNOUNCEMENT ON THE PLAYER BELOW