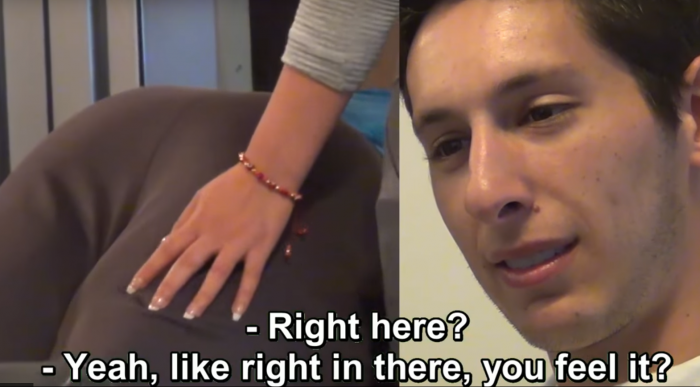 WATCH: Guy Tests Girlfriend to See if She’ll Cheat on Him With a Personal Trainer at the Gym

Some guys will go insanely far to try and see if their girlfriend is a potential cheater. In this edition of “To Catch a Cheater”, we see a girlfriend being spied on at the gym, with a pretty buff physical trainer being planted there to see if she might stray from her relationship with her boyfriend. “She’s flirtatious. It’s okay to be flirtatious, but you don’t cross the edge,” says the boyfriend as he watches on the monitor.

“I don’t mean to interrupt, your technique was just a little bit off… Can I assist you?”, says the physical trainer as he smoothly tries to break the ice with the girlfriend while she’s working out.

Showing her the “proper technique”, he eventually moves to taking her to another machine he thinks might benefit her. “I’m actually a personal trainer,” he says, smiling. “I do (charge), but since I’m just giving you a few pointers I’m not going to charge you for anything.”

The trainer starts to get a bit more hands-on as she works out her glutes, putting his hand on the small of her back and the top of her thighs.

The boyfriend cringes a little as he looks on. “Make sure you get that squeeze… You can feel it on my quads right here,” says the trainer as he demonstrates, getting the girlfriend to start making some contact with him.

“This is how you get a boyfriend,” he says. “Do you have a boyfriend?”

“It’s kinda complicated,” she responds, as her boyfriend grits his teeth.

“Maybe we could hang out, go on a date sometime, you know, whatever happens, happens.”

At this point, most guys would be done watching, but somehow the boyfriend just continues to watch this trainwreck unfold as his girlfriend does some very strange leg exercises as the trainer looks on. She then gives him her number under the guise of being “gym partners”.

Get set for a brutal case of denial from the girl’s boyfriend, who can’t believe she said “it’s complicated”, but still says she “passes” the test…

Too bad she seems to have sent a video of herself twerking to the physical trainer. “This is unf*cking-believable,” says the boyfriend, absolutely blown away by the bombshell the host of the show just dropped on him.

Watch the video on the player below and let us know: