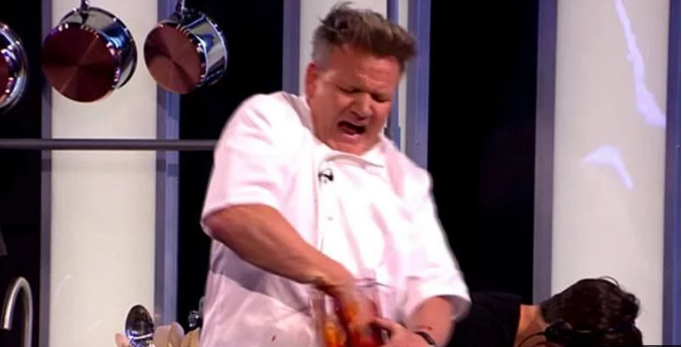 Scottish celebrity chef Gordon Ramsay is well known for his public meltdowns, berating contestants on his TV show “Hell’s Kitchen” and dressing down more than a few restaurateurs in his time on “Kitchen Nightmares”. Appearing now as the new host of the Nightly Show, Ramsay has shown he actually has some semblance of a sense of humor hidden under that famously furrowed brow.

Whipping up a quick little fruit salad smoothie for guest Frank Skinner’s birthday, Ramsay seemed to have decided he’d have a little fun with a secret skit, where a multitude of things went wrong.

First, he didn’t have a knife, then he didn’t have a towel, and then the chopping board was more unstable than the famous chef’s temper! Strangely, he didn’t curse at anyone, which is normally his default reaction for just about any situation or emotion he’s feeling. Gordon Ramsay losing his shit in the kitchen.

Peeling up a banana and chucking it in the blender, Ramsay feigned surprise when OF COURSE the blender wouldn’t switch on.

A couple of stagehands acting rather sheepish rushed on to try and sort out the issue, but to no avail. Ever a man of action, chef Ramsay stuck his hand in the blender when suddenly the blades started to spin, sending blood splattering all over the kitchen! Lying on the ground with his hand bleeding all over him, Ramsay looked up in agony at his guest Frank Skinner, who was clearly in shock.

That’s when the chef jumped up and pointed at Skinner, laughing and revealing that it had all been a joke.

Given that you hardly ever see Ramsay crack a smile, let alone make a joke, it’s all a bit weird. Like seeing a dog walk on its hind legs, or good old President Trump saying something not completely batshit insane for once. Check out the video below of celebrity chef Gordon Ramsay’s joke on Frank Skinner and let us know what you think!