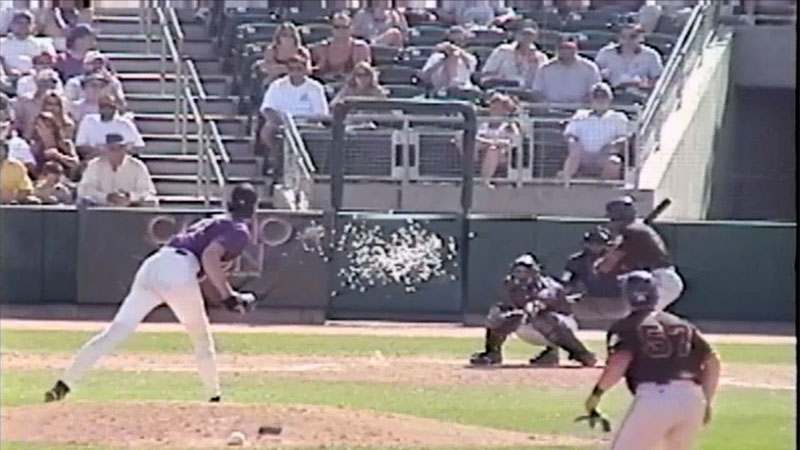 If you know anybody with a soft spots for birds, you may want to shield them from this footage. It contains one of the most wicked fastballs to ever take place in baseball and one of the most horrifying end results to a pitch in history.

March 24, 2001, it is the seventh inning of a spring training game. Calvin Murray was at the plate. The Giants were playing against the Arizona Diamondbacks. Murray was due to pitch to Arizona’s Randy Johnson.

He wound up as usual and let go of a blistering fastball. Out of nowhere an explosion appears midway between the plate and the mound and it looks like the ball has spontaneously erupted in an explosion of feathers. Alas, no, Murray had managed to absolutely destroy a bird that had somehow managed to fly perfectly into the path of the oncoming fastball.

“A blur going across home plate. The ball simultaneously hitting that blur,” Johnson said of the experience. “It’s just hard to really put that in perspective. It happened so quick,” said Diamondback’s manager Bob Brenly. If you watch the video you can hear the crowd gasp as they realize what has happened in front of them.

“It literally just turned into a cloud of feathers.” iJeff Kent proudly displaying the still-warm corpse like a trophy. He clearly has a grim sense of humor.

Apparently, we’re lucky to even get to see the footage, as training games weren’t televised back in 2001. Arizona’s video coordinator Jim Currigan was an absolute legend and took a camera to film the game that day, leading us to now have footage of one of the most insanely rare moments in sports history.