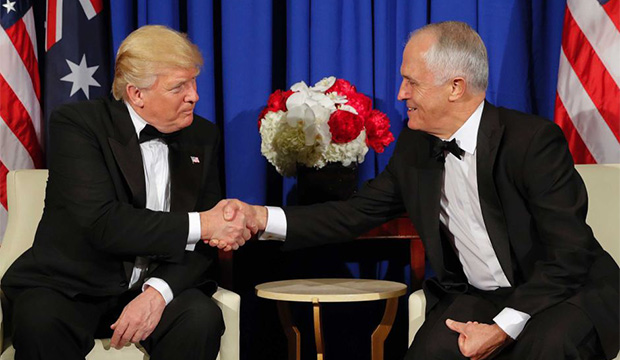 Good ol’ Uncle Mal isn’t known for his sense of humour, however, when it comes to the new politician that everyone likes to make fun of, even he’s decided to take a crack at it. If you’re not from Australia, Malcolm Turnbull is our Prime Minister…

At the Canberra Midwinter Ball on Wednesday the 14th this week, Turnbull used his very public platform to mock non-other than US President Donald Trump. Whilst some of us are still scratching our heads wondering how the reality TV show actor/businessman got elected, many people have wasted absolutely no time in making Trump the butt of jokes all over the Internet, and on mainstream TV around the world.

Malcolm Turnbull met with Trump personally back in early May, with most media outlets reporting the encounter was a positive one. Despite Trump claiming that the US got “a bad deal” out of the Australia-United States Free Trade Agreement (FTA for short), threatening to withdraw, Malcolm was still amicable with the bloke. Turnbull should know that if you’re going to roast someone, they’re actually supposed to be present in the room. The Canberra Midwinter Ball is reserved for current members of Federal Parliament, Senators and their staff, and full-time Federal Parliamentary Press Gallery staff – us mere mortals aren’t supposed to ever hear what goes on behind closed doors. Thankfully for us, audio from his speech has been leaked.

We already have Trump, his administration, and his political supporters to thank for golden terms such as “Fake News”, “Alternative Facts”, and “Cofveve”. Wait what? Cofveve? Yeah we don’t know what he’s talking about with that tweet either down here.

Trump seems incapable of succeeding in anything that isn’t real-estate, with several bankruptcies under his watch for companies he’s managed. None the less, a lot of people seem intent on letting him have a fair go at the leadership job. Many American voters thought it was a great idea. Who truly knows what it’s like up there unless ya live there I guess.

For the Americans that didn’t want this bloke as ya president, don’t worry, you’ve potentially only got another 1236 days to go.

Check out what Turnbull had to say here: