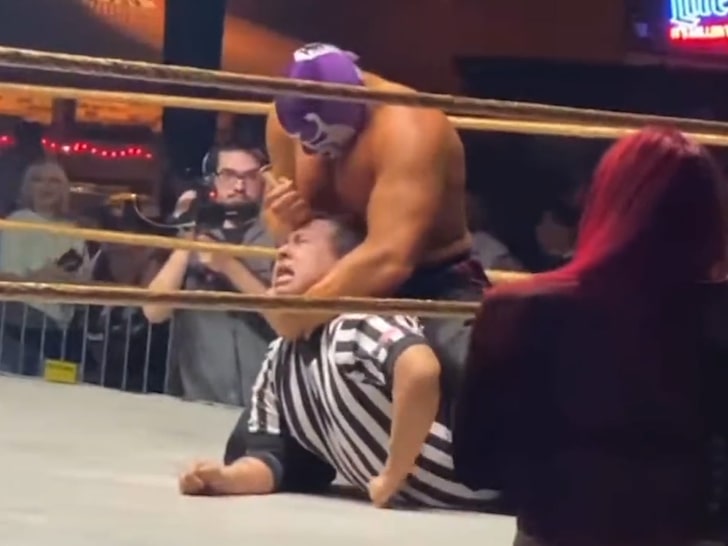 As far as most of us are concerned, the world of pro-wrestling is supposed to be pretend. Don’t get us wrong, accidents are always going to happen, and that level of physicality is always going to come up with some inherent challenges, but for the most part it’s supposed to be an entertaining pantomime of melodrama, violence, and humour. Unfortunately, a bizarre incident in a recent match has some people questioning just what the f**k went wrong.

While we realise that some people will already know what we’re talking about here, we’ll clue in the masses: According to TMZ, the wrestler Hannibal (real name Devon Nicholson) took to the ref’s head with an iron spike after a recent contest, leaving him requiring multiple stitches.

I’m not about “Cancel Culture”, but promotions need to STOP booking “Hannibal”, AKA “Blood Hunter”. There’s been numerous accusations of sexual harassment & several incidents of him legit injuring people. He’s a reckless liability that’s all about himself & getting YouTube views. pic.twitter.com/AfB2hc5LiF

Supposedly, it happened right after his contest with Carlito. Nicholson, though, who runs his own YouTube channel is pretty f**ken miffed at the way things have been represented. In their piece, TMZ claim Hannibal stuck around after the match and ‘took out a spike and began ramming it into the ref’s forehead over and over and over again.’

They say ‘the full video of the match shows Nicholson stabbed and scraped the man with the sharp object over a dozen times — leaving him in a pool of blood in the ring.’

World Class just made this statement less than an hour ago.

Nicholson, though, has taken to YouTube to refute the claims, saying that it’s all been misrepresented and that he’s been hung out to dry. First of all, he takes issue with them saying they reached out to him for comment and that he’s been ‘fired’ by World Class Pro Wrestling.

He shows an email he says reveals that he actually quit the event, then explains how the organiser hired a ref who was a ‘bleeder’ for this particular stunt and also provided him with the prop designed to make the incident realistic.

I've heard from countless people who worked the show with Hannibal who are digusted with what he did this weekend. I'm working on putting together additional information.

“As far as the quote-unquote attack angle…that referee was hired because he was a bleeder. He did not referee any other matches on the card. His sole purpose to why he was hired was to bleed.” He goes on to say that he spoke to the referee the next day and “He said that we were cool.”

He then says, “The referee was supposed to bleed from razor-blade cuts and I assume he actually cut himself with the razor blades…The bottom part of my hand is what I thought was covering the spike so I thought the fatty part of my hand was hitting it. He gave zero indication that he wasn’t just selling and was legitimately hurt. He never said stop.”

As you can imagine, the story goes on, and it’s hard to know exactly where to stand on this one. The photos are incriminating, but Nicholson certainly comes off as if he’s feeling a bit aggrieved. Either way, though, maybe it’s a sign that even when something’s supposed to be a pantomime it can get out of hand.

Final thought: Yeah, nah, it’s a pretty epic tale, and we want to know what you lot reckon. Is the truth somewhere in the middle of the argument or is this one that got too out of hand too quickly. Let us know.