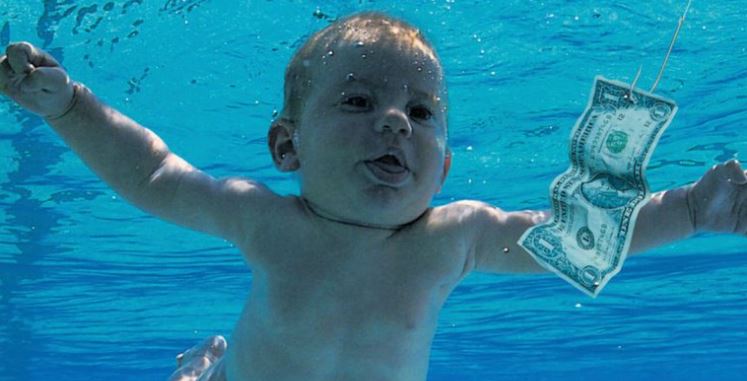 When you’ve been around for a while, you can be forgiven for starting to think you’ve seen everything. Yeah, nah, it’s true. You start to take the world for granted. You forget about its propensity to spew up surprising s**t, and you just get on with life. Of course, that s**t never lasts for long. Yeah, nah, not with human nature on the case. And now, in the latest venture of s**t you probably could have predicted if you thought about it, the bloke who was photographed as a naked baby for Nirvana’s Nevermind is suing them over the image.

Rightio, while it’s hard to believe that there might be people out there who aren’t familiar with Nirvana and their seminal album Nevermind, we’re gonna steer a couple of you to the old Google button. Go and have a squiz at one of the most famous album covers ever, then come back.

Rightio, the now grown-up bloke who stars in that famous image goes by the name of Spencer Elden and he’s reached a point in life where he’s considered the effect his role as the Nevermind-baby has had on him, and he’s not happy.

Now, before we go on, it’s not on us to pass judgement. Yeah, nah, that’s not our job. It is true that in the past, Elden has celebrated his involvement, and we’re not even going to guess as to why. After all, once you think about it – and you think past the idea that a young bloke might try to cash in – there are a few deep-seated issues an image like that could lead to, especially if it was one of the most famous album covers ever.

Anyway, we’ve started doing what we said we wouldn’t, so let’s go to Elden’s own words. Court documents claim he ‘was forced to engage in commercial sexual acts while under the age of 18 years old’ and that his parents didn’t authorise ‘any images of Spencer or of his likeness, and certainly not of commercial child pornography depicting him.’

The surviving members of Nirvana and estate of Kurt Cobain have been sued by Spencer Elden, the baby from the cover of Nevermind. Elden claims the band violated federal child pornography statutes. https://t.co/M4PW3KhJvT

He also reckons he’s suffered ‘lifelong damages’ as a result of the photo, claiming he’s been burdened with ‘extreme and permanent emotional distress with physical manifestations,’ ‘interference with his normal development and educational progress,’ and ‘lifelong loss of income earning capacity.’

In the past, Elden’s said his involvement with the album was a ‘positive thing.’ Most recently, though, he told GQ Australia, he’d become p**sed off with the cover and that the use of his image was ‘f**ked up.’

It’ll be interesting to see where this one goes.

Final thought: Yeah, this is a bloody doozy. Deadset, at first glance, it’s easy to dismiss this as a cash-grab, but once you start to think about the real-life effects this could have on an individual, especially considering that everyone in the world has seen their junk before they even hit puberty, it asks some pretty f**ken deep questions. So, let us know what you reckon.