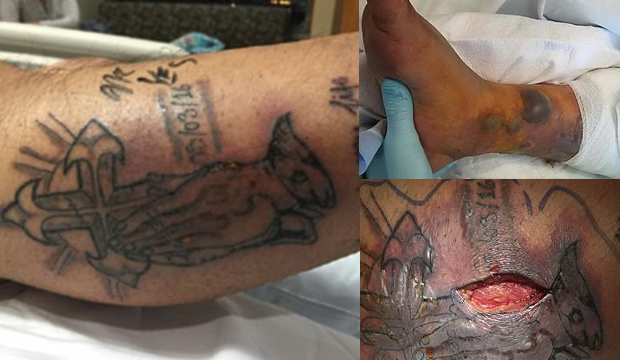 Man Dies After Going For Swim With A Fresh Tattoo

All our lives we’re told we shouldn’t go swimming for at least 30 minutes after eating. Most of us figure out at some point that nothing bad really ever happens, and eventually realise they tell us that because they don’t want to clean up the puke of some kid who can’t keep his lunch down whilst swimming.

However, this story is a reminder for all who decide to get a tattoo, under any circumstances, that the warnings we receive post-tattoo are very real indeed. A man in the United States has died due to septic shock after an infection that originated in a fresh tattoo spread to the rest of his body. Apparently the man had ignored advice and instead gone swimming in the Gulf of Mexico, not even days after receiving the fresh ink.

The man goes unidentified, with the case report being released on BMJ Case Reports. Images show where flesh around the site of the initial infection had to be removed, and how the infection had spread to his lower extremities. His situation was complicated further by an ongoing liver condition, exacerbated by excessive drinking.

Even State governments offer guidelines on what to do after getting a tattoo, with the first bit of advice being “follow the advice given by the tattooist regarding aftercare and how best to prevent infection”. Tattooists in Australia operate under significant regulations which reduce the risks associated with getting inked.

The tattooing process, which essentially involves getting pricked with a needle, or multiple needles, 50 to 3,000 times a second,  leaves the skin extremely vulnerable to infections. Although many of us like to think we’re bad-asses, working through all sort of injuries and sicknesses, bacteria is here to remind us we’re not.