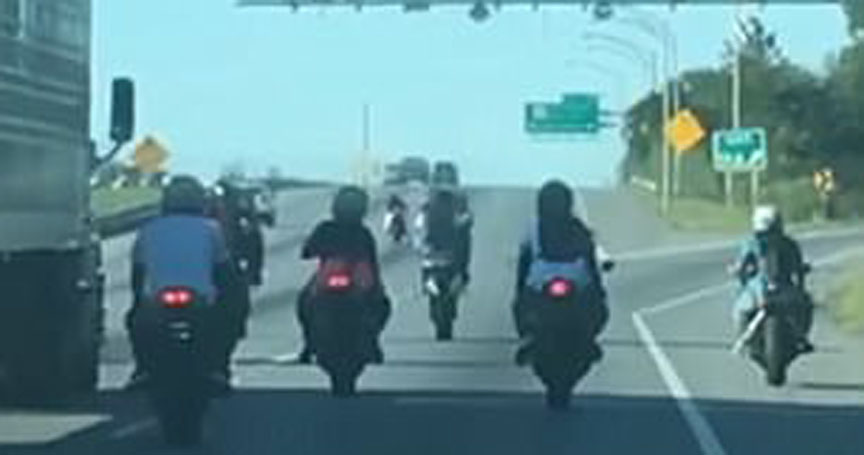 If there’s one thing you have to remember in life, it’s this: if you’re going to be a f*cken showpony, you better be damn good at it.

It saves you all sorts of humiliation.

Look, Mum! I have a short life expectancy! (Credit: tribunist.com)

For example, if you’re going to join a gang of guys who want to make out like the BMX Bandits on steroids, block off four lanes of highway and chuck a couple of fully-sick tricks, you need some skills.

Fortunately for us, Dashcams are everywhere these days and the chick in this car catches the exact moment karma cuts the tall poppies to size!

Here she is cruising along, having a bit of a chat about what a nice day it is to ride a bike, noticing some guys wearing colours and then F#%K YES! Did you see that?

Uh-oh though – turns out he’s on his way to destination F#%Ked!

After that he’s on his ass. His bike is in pieces. He won’t be happy with that.

How’s the aftermath though? There’s a guy up front on his back, but we can’t really see him, so let’s focus on the foreground.

That’s where you’ll notice two of the bikers come to get their annihilated bike off the road. They’re happily doing that when they hear sirens and leg it!

You can see old mate in the red shirt kind of wants to suss it out a bit, but his mates are like, ‘yeah nah, the bloody cops are here.’

Apparently, while they’re all just gapping it, they’ve left their mate in the colours behind. According to the chick narrating the dash-cam he’s on the road in a real bad way. And that’s just not cricket.

You can’t leave a mate behind, even when the cops are coming.

Now we’re not sure what these guys were doing. Some have suggested it was a protest. Others think the best way to look at this video is as a lesson.

When you show off on your sports bike, make sure you’ve got the skills to pay the bills because hospital is not cheap.