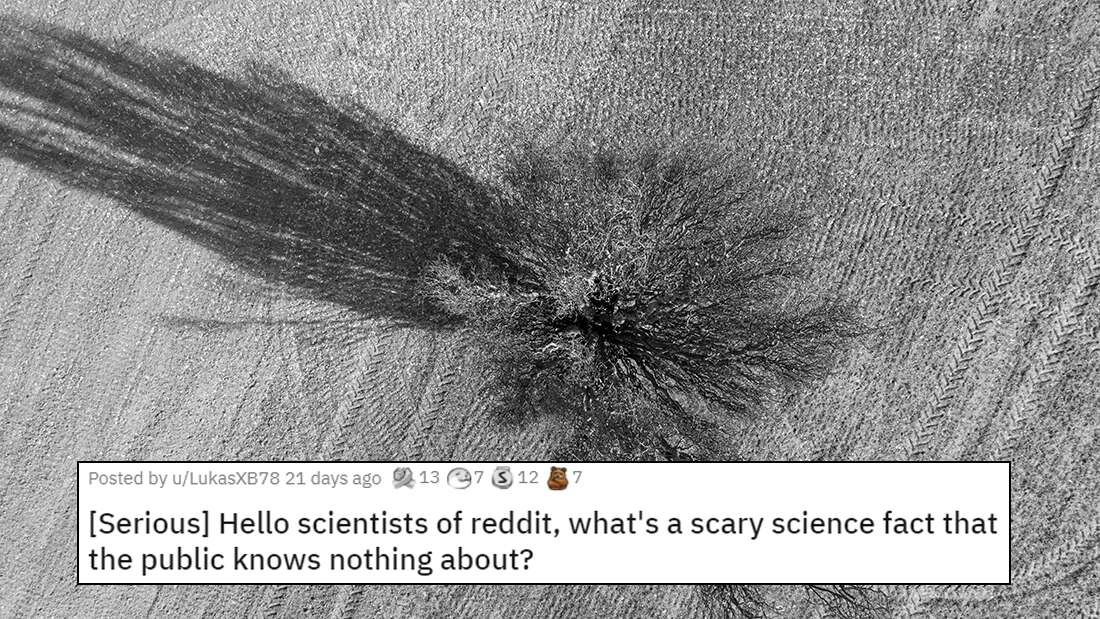 A lot of books and movies operate on the premise that the world is a f**ken scary place and that it takes a special group of people to keep that fact from humanity. Up until now, we figured that if that was the case, scientists would be the ones to guard that knowledge. Turns out we were wrong. They’re not guarding that knowledge at all. They’re taking to Reddit and spilling the beans.

Yeah, nah, we thought they might like to keep their secrets, but apparently not. The scientists of Reddit have decided that’s a load of s**t. They’ve decided to risk global panic by sharing some of the most terrifying science facts that the general populace doesn’t really know about.

“In 1958, a 7600 lbs nuclear bomb was lost off the Georgia coast near Savannah. It’s never been found – Unlucky-Pomegranate 3”

In the interests of clarity, we’re not going to mislead you and say that this knowledge isn’t already out there, but for the most part, it’s knowledge that’s not seen as widely known fact. Also, it’s not s**t like ‘oh, yeah aliens are real, Cthulhu exists, and the lizard people do run the planet.

“Once symptomatic, rabies has a 100%* fatality rate. The only options are the rabies vaccine and immunoglobulin therapy, which, again, must be administered before any symptoms. – zipybug14”

“There is a gravitational anomaly in space called the great attractor which is pulling everything within the Virgo and Hydra-Centaurus superclusters towards it. It lies 150-250 million light years from the milky way, which itself is being pulled towards it too. The scary part is that relative to us, this anomaly lies within the same plane as our own galaxy making it very difficult to observe. Essentially, we have almost no concrete idea of what it is. – Nervous_Relation9213”

Nah, it’s the kinda s**t that beats at the heart of those things you’d rather not know. Things like gigantic and mostly unobservable vacuums in space, viruses that live in soil ready to be stumbled upon, the horrifying reality of scurvy, and a tonne of other awesome facts.

“If your dog swins in a lake after receiving a spot on flea treatment – it absolutely decimates the invertibrate population.

A large dog swimming in 8 Olympic swimming pools worth of water soon after treatment will leech enough neurotoxin to kill 50% of the lake’s invertebrate population within 48 hours.

There’s some awareness of this, but it’s not being taken seriously enough! – konwiddak”

“Scientific litterature conclusion on alzheimer’s disease and other neurodegenerative diseases in general is that the diseases start decades before the first obvious symptoms and that we need to treat them at this stage. When you exhibit obvious symptoms, it’s too late, your brain is already mush.

Anyway, it all makes for pretty interesting reading. Give it a squiz. Just, you know, try not to lose any sleep over it.

“Anthrax can sporulate in dirt and stay viable for hundreds of years until the soil is disturbed and the spores inhaled. – TheThoughtwell”

Final thought: Yeah, we’re not sure whether reading this was a good idea or not, but as always, we’re gonna throw it over to you. What things do you find terrifying that most of the world doesn’t know?

Some people are just f**ken full-on off-tap. Fair dinkum. One minute someone might be mildly annoyed about their soup being too f**ken hot and the next a switch might have flipped in their head and they might have thr...