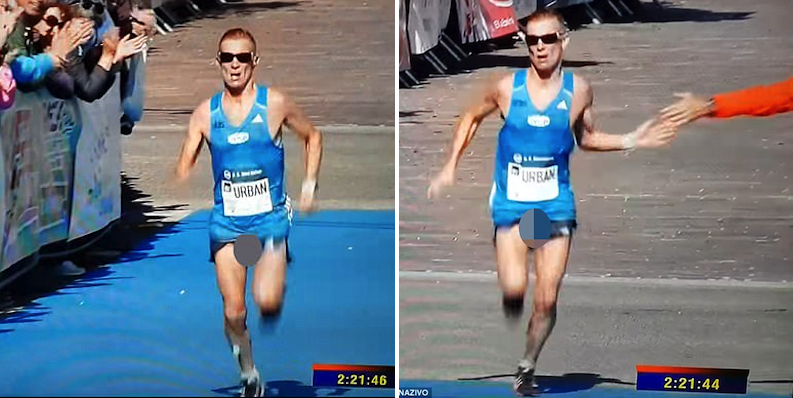 A professional runner has managed to finish a marathon in Slovakia despite the fact that his cock and balls freed themselves from the confines of his shorts and were on display for all to see.

31-year-old Jozef Urban was coming to the end of the Kosice Peace Marathon last weekend when his running shorts appear to have torn, causing his meat-and-two-veg to flop about as he completed the race.

Any bloke who’s had to run while wearing loose-fitting boxer shorts knows how treacherous it can be but it didn’t seem to faze Jozef in the slightest. At one point, the bloody legend even gives a spectator a high-five.

With the end in sight and fans going crazy, Jozef sprints like a madman towards the finish line. Once he’s completed the race, the accidental streaker keels over. Needless to say, Marathons can be bad for your health – Just ask ‘Pooey Paula’ Radcliffe

He makes it look like he’s simply exhausted from running the marathon but anyone who’s had their balls slap against their thighs knows the man is suffering from a dull ache in the pit of his stomach.

Jozef finished the race in 10th position with a time of 2 hours, 21 minutes and 51 seconds which was a personal best and 27 seconds faster than his previous best time. I reckon having his manhood on display must have provided him with a bit of extra motivation! The name ‘Marathon’ comes from the legend of Pheidippides, the Greek messenger. Legend has it, back in 490 BC, Pheidippides was sent from the battlefield of Marathon to Athens in order to announce that their army had defeated the Persians in the Battle of Marathon. It is said that he ran the entire distance without stopping, burst into the assembly and shouted “we have won!” before promptly collapsing and dying. Had to chuck in a chuck up pic for good measure…

A marathon is 26.2 miles, the distance between Marathon and Athens. The Kosice Peace Marathon is the oldest in Europe and has been going since 1924.

I’m pretty sure they haven’t seen this sort of thing too often, though. You gotta check this video out!

WATCH THE ACCIDENTAL STREAKER ON THE PLAYER BELOW: