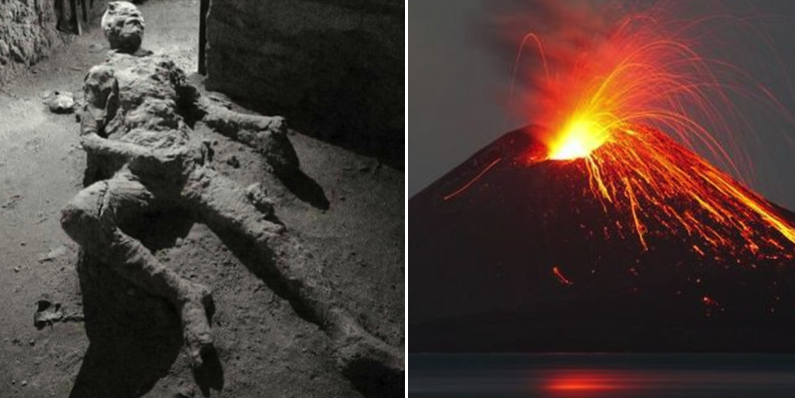 If you were certain that your world was coming to an end, how would you spend your last few moments on earth? Would you go into shock and whimper in a corner until it was all over? Perhaps you’d call loved ones to say one last goodbye? Or would you use the opportunity to get in one last cheeky wank, just for old times sake?

If you chose option 3, it seems that you’re not alone: a photograph of a preserved body from Pompeii, Italy, during the eruption of Mount Vesuvius in 79AD appears to show a male victim in the midst of knocking one out.

After it was posted to the Pompeii Archaeological Park Instagram account, the picture quickly went viral, causing many to speculate as to just what he was doing when the end came.

Unsurprisingly, the leading theory online is that the man was mid-bash when his untimely death occurred. And judging by the way his leg is contorted, it’s been proposed that he was nearing his own eruption at the time that Vesuvius blew. Sadly, the theory that the oldest known wanker in the world had been uncovered appears to be wishful thinking, as volcanologist and full-time wet blanket Pier Paolo Petrone pointed out.

According to Petrone, the victims of Vesuvius were killed by thermal shock when their organs were cooked by deep, fourth-degree burns.

“The individual in the photo is an adult man, killed by the hot pyroclastic surge – hot gas and ash cloud which killed most of the population living around Mount Vesuvius – with both arms and legs flexed due to the heat.”

Petrone went on to state that the man most likely took up his wanky pose after death.

“Most of the human victims found in Pompeii often show ‘strange’ position of arms and legs, due to the contraction of limbs as a consequence of the heat effect on their bodies after death occurred,” he said.

And while it would be foolish to argue with volcanologist who has been studying Vesuvius and its victims for the last 25 years, there’s no way he can be 100% sure that the man wasn’t pulling his pud when the mighty mountain blew its load. Not only is this picture hilarious and inspiring in equal measure, it has also given rise to a sh*tload of classic tweets. Here’s a few of the best…

When someone says evacuate, but you thought they said ejaculate…..

He held on till the very end……great man

His browser history is gone though…

He died holding his loved ones.