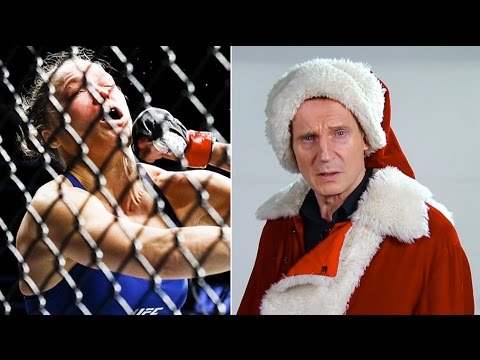 To help you ease into the transition I have completed me recap on the previous month, which was of course December. I think. Yep, it was definitely December last month.

As usual, too much crap happens every single month for me to keep track of, but I’ve compiled some of the big stuff alongside the tiny seemingly meaningless stuff for your entertainment pleasure.

We saw Liam Neeson become a mint santa, we saw too many celebrity deaths again, and we saw Rhonda Rousey come and go in less than one minute in the UFC octagon. What a time to be alive as the kids say.

Anyhow, I hope ya enjoy the commentary mayhem and recap of that nutty month.

The video is right below ya. Down. Oi. Nah. Yeah. Just down a little. Don’t panic it’s below you. Honest. Just scroll down a smidgen and you’ll find it. Without further ado… WTF Happened in December:

There ya have it ya top blokes and sheilas! Another year is done and dusted on planet Earth and we’re cruising on into the next one. Yeah nah yeah it’s important to stay calm here, last year was hectic, but it may not slow down ya know… 2017 could be as turbulent as what we’ve just been through.

So my advice (if ya want it) is just to stay cool, keep being awesome, and we can all get through this life thing without being bastards no worries I reckon.

But enough of me playing Dr. Phil to help you bounce back from 2016. You’ll be fine. Screw Dr. Phil.

What were some of the most devastating OR best times of 2016 for you?

I’ve had a fun time entertaining you cheeky mob on a weekly basis for over a year and I of course hope to keep that up throughout 2017. Who knows what wacky stuff is gonna land on me desk this year.

Hope ya had a mint Christmas and you’ve recovered from ya New Years Eve hungovers as well. Time to get back to work and our regular bloody lives.

See ya back on the internet!