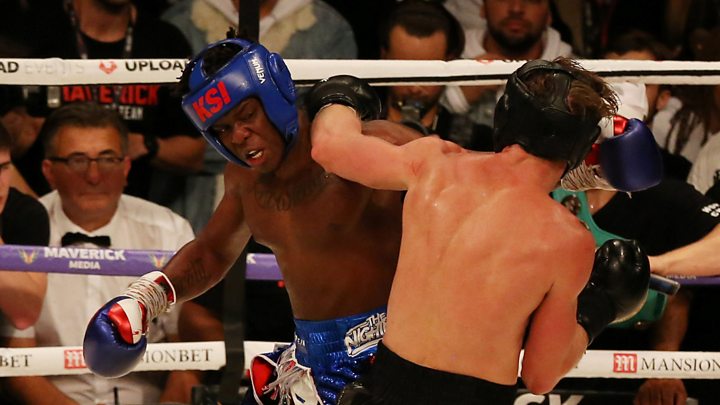 How ya go’in ladies and gents? Good? Good. It’s Ozzy Man here writing this post. Some of you may’ve heard of the YouTuber boxing match that took place over the weekend, many of you may not have heard of it and give zero f*cks. Because I spend a lot of time on YouTube as a viewer and a creator I very much had a few f*cks to give for this event.

I have made a commentary video on the headline fight KSI vs Logan Paul and it’s in the player at the bottom of this page. I’ll give some written commentary on the other fights and the event as a whole before you get to that, though.

The event took place at Manchester Arena with close to 20,000 people packed in there. Overall there were 8 fights offering up a solid 6 hours of entertainment. It was about 13 bucks AUD, which was fair enough considering the stream was great quality and it would’ve taken lots of staff to make this happen.

I’m fairly sure most of the people involved in the fights run YouTube channels. A couple of them you could outright say are martial artists SLASH YouTubers. Yeah, there were indeed a few multi-skilled legends in here:

One of me favourite fighters of the night on the undercard was FaZe Sensei. He’s fast, he’s accurate, and he’s humble as f*ck. He won by TKO after delivering some tasty liver shots to his opponent. BAM! Right in the liver, mate.

JMX and Coach Richard was a solid battle as well. AnEsonGib vs Jay Swingler had a lot of heated moments. Most of the other fights beyond these were either a little too mismatched or just entertaining for the scrappiness. I think it was a fun mix of fights for the most part. I like the showdowns with genuine skill, yet also like the scrappy pub style brawls with heart.

It was exciting to see Michael from The RackaRacka (based in Adelaide, Australia) out there facing off against a YouTuber known as Scarce.

I thought Michael showed top notch fitness and raw talent ay. I was hoping he’d be an energetic bastard as The RackaRacka are known for their fight videos on YouTube. They do their own stunt work like Tom Cruise, only with less occupational health and safety procedures. What I’m saying is The RackRacka are not afraid to get their hands dirty. Good work to Scarce as well. The bloke lost a lot of weight to participate in this event and has a very tough noggin’. After the 6 undercard fights it was time for Deji (KSI’s brother) to fight Jake Paul (Logan Paul’s brother). I think this is called the co-headline, I better call it a co-main-headline so no one’s feelings or ego’s are hurt (us online content creators have fragile egos ay, myself included). It’s best to get the bloody semantics right and call it a f*cken co-headline shared main event fight of equal importance etc.

I think Deji was considered the underdog, but it did not faze him. He was a calm motherf*cker and had a rock solid technique I thought. You could tell Jake had also worked hard however and he was just that little bit stronger when it came to landing punches consistently. Deji’s team had to throw the towel in as Deji ran outta gas and Jake closed in with a flurry of blows. I will fair dinkum admit that this fight was a lot better than I thought it would be and well done to both fellas here. Jake wonders if he underestimated Deji a smidgen.

Finally, it was time for Olajide “KSI” Olatunji vs. Logan Paul.

Which means that it’s time to switch to my commentary and review via a video.

Check it out in the player below!

Final Thoughts: I am sincerely happy that a large scale event produced by YouTubers and their management teams was not a hunk of junk. There was a great deal of value offered to the fan bases of the YouTubers involved (and the potential to attract a wider audience). Everyone who put the gloves on worked hard and delivered a fantastic show. Of course, given my line of work, the only thing that’s bugging me is their copyright policy after the event.

A vague company called ATH_Piracy is in charge of issuing global geo-blocks and DMCA takedowns on any channels using footage from the event (and the usage might qualify as Fair Use/Fair Dealing). I support the pay-to-play decision, as it meant the production values could be high, and 800,000+ people paid for it. But to keep milking it afterwards for cash and shut down all remixes, mashups, reviews, and works of genuine fandom is not on fleek or lit AF, unfortunately. It’s a bummer and such restrictiveness results in a wasted opportunity to organically grow the interest of future events like this. Freakin’ HBO doesn’t shut down GoT footage that qualifies as Fair Use after a show airs. Fascinating times.

UPDATE: ATH_Piracy stands for Athletia Sports. They are a Digital Rights Management agency based in Germany. Likely hired as a vague third party to do the work on YouTube of copyright blocking.