Over the years, Ozzyland has produced its fair share of cool as f**k famous c**ts, but the coolest of them all is easily the legendary Nick Cave. Here’s a dude with more talent and creativity in his little pinkie than some lauded celebs have in their entire body. He’s not just for old dudes with their head in the past, either. Yeah, nah, this legend recently received an email from a cool little ten-year-old kid. His response was classic Nick Cave. Classy, collected and cool as a f**ken cucumber.

Look, it’s no secret Nick Cave is a pretty awesome dude. But when he’s not writing awesome novels like The Death of Bunny Munro, or movies like The Proposition, he’s being Nick Cave, the champion behind Nick Cave and the Bad Seeds and Grinderman (among others). Anyway, it’s not like he needs more of an introduction, he is who he is, and the cool kids still look up to him.

So when Ptolemy, a ten-year-old little dude sent him an email asking how Cave’s music might affect his life, Cave did what he does best. He put pen to paper and crafted a letter that Ptolemy will be able to treasure forever.

Before we get right into it, though, how’s the f**ken poise on this c**t? He’s like, “Yeah, man, you’re the little dude I met previously and you asked a question so good, I couldn’t help thinking about it after.” That kind of respect from an absolute legend of the industry is so humble against the grain of what we’ve come to expect in a world of showboating celebs, that it sums up exactly why Cave is such a treasured icon of Ozzyland. 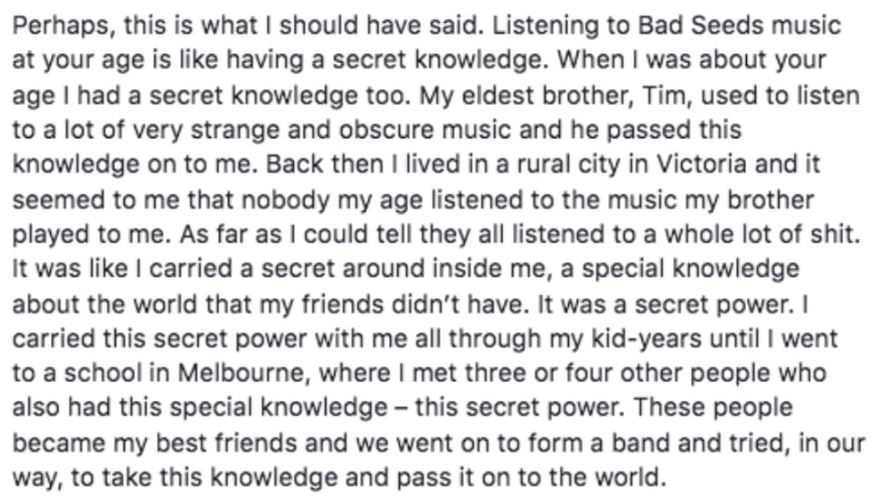 As for the rest of it, we don’t give a monkey’s who you are, a letter like that from someone you respect is bound to leave you chuffed to bits. Bloody oath, Nick, you could almost make an Ocker eye water, you legend.

Final thought: There’s really not much more to say here. Just f**ken crank up your favourite Nick Cave song and blast the s**t out of it. The dude deserves it. He’s a top bloke if there ever was one!