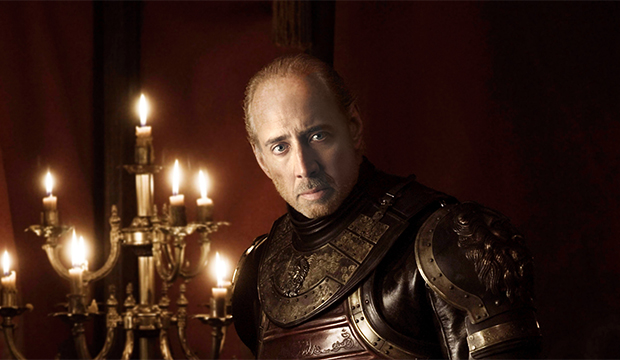 In a series of images known as “Cage of Thrones”, we get to revisit scenes from earlier seasons of Game of Thrones. If you’re not up to date with the series, then spoiler alert I guess? But no, Nicholas Cage does not appear in GoT at any point in time.

The images went viral back in 2014, so whilst we’re waiting for the next season of Game of Thrones, we thought we’d revisit it. We are certainly glad he didn’t Photoshop Khal Drogo and Daenerys after their wedding. Q: Why do the Lannisters have such big beds? A: Because they push two twins together to make a King! Game of Throne diverted from the written books in Season 5, something which some observers felt was a positive thing. The series writers were no longer beholden to George RR Martin’s original source material which drove the initial seasons. The first of the Game of Thrones books was release in 1996 whilst the series didn’t debut until 2011, giving the books a 15 year lead on the series. But George R. R. Martin himself has said he doesn’t need to finish writing the books for the series to continue. Six other writers fill out the Game of Thrones story lines for the TV show, and Martin has given them an entire detailed world created in seven books. If they stay true to the source there’s no excuse if they fuck up the rest of the series. Of course, with a series like Game of Thrones, practically everything is “Photoshopped”, modeled, rendered and composited, with it being pretty damn hard to tell what’s real and what’s not. Check out this VFX reel, released nearly 4 years ago, from Season 4 of Game of Thrones.

Game of Thrones, Season 4 – VFX making of reel from Mackevision on Vimeo.