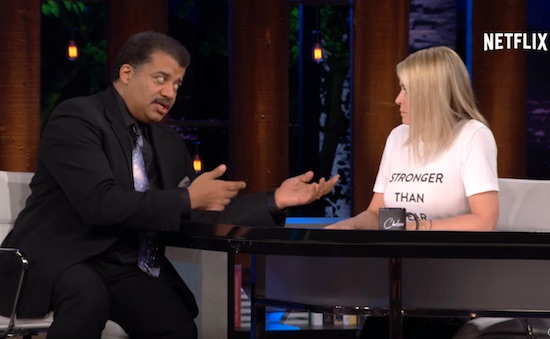 Neil DeGrasse Tyson Gets Asked If He Believes In God, The Internet Blows Up At His Response

Astrophysicist Neil Degrasse Tyson sat down and had a chat with Chelsea Handler when she asked quite an important question. Now Neil gets asked a lot of questions – I mean it’s kind of his job to tell people how the universe works – and I’m sure he has been asked this one before, but being put on the spot like this can’t have been easy. Answering this question either way will upset a lot of people, so it’s one that should be answered carefully. Chelsea asked him, “Do you believe in God?” A celebrity should be even more careful of this question, especially in the States, especially if your answer is a no. A staggering 70% of the adult population called themselves a Christian in the US, so saying that you do not believe in God is basically saying that you think most of the adult population of the United States is wrong. He is an evidence based man and wants an evidence based God, and has used logic to come to this conclusion. Would you expect anything less from this man? Even Chelsea was impressed with the answer. Over here in Australia, the number is less but still 60% of the population identify themselves as Christian.

When it comes to technology, the general rule of thumb is that it’s supposed to make your life easier. That’s why we’re all big fans of smart technology. Yeah, nah, movies like Terminator might posit that artificial i...

As you know, people have been getting pretty bloody excited about the metal monoliths that have been popping up in the US and Romania. Deadset, some have even suggested they’re the harbinger of 2020’s final phase. In ...