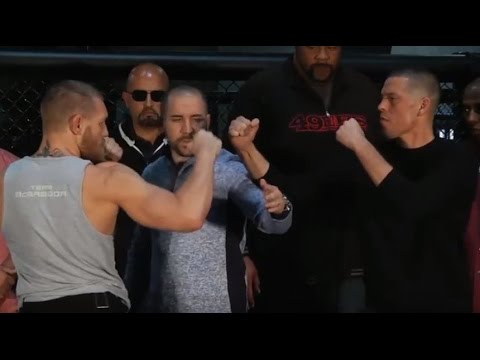 McGregor Predicts When Diaz Will Be KO’d

UFC 196 is rapidly approaching (March 5 to be exact) and McGregor is now fighting Nate Diaz.

If you’ve been a little out of the bloody loop lately Rafael dos Anjos broke his foot and he’s had to withdraw from the 196 competition.

None the less, the show must go on ladies and gents…

McGregor and Diaz have only been rivals for 2 days, but already McGregor reckons he has Diaz fully sussed out.

It’s nice to see McGregor is in his usual shit-stirring form as he gives a prediction on when Diaz will go down against him:

Diaz is gonna be going into this fight quite unprepared. He’s got 10 days to get his shit together and fight McGregor. I’d like to see his preparation in the form of a slick Rocky-esque montage.

Diaz would be a tough fella to grapple with though, so despite lack of preparation it should actually be a damn fine fight.

Here’s a smidgen more footage from the press conference: