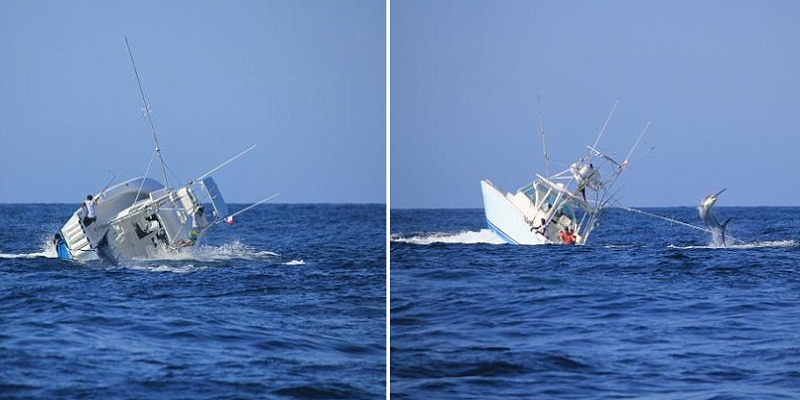 It must be hell being a fisherman out at sea. You’ve got to contend with the chances of massive swells, terrifying storm cells, and the occasional mechanical malfunction. On top of that you’ve then got to deal with what might be lurking in the dark blue depths of the ocean. Some fisherman off the coast of Panama certainly got more than they bargained for when they hooked a black marlin off the back of their boat. The amazing images captured below show just how much damage a fish as powerful as a black marlin is capable of causing.

Apparently, a rogue wave may have contributed to the boat becoming submerged, though from the pictures captured the water looks pretty calm, you know, aside from the giant fish jumping out of it. A spokesman for Strike Yachts released a statement on Facebook regarding the weather conditions on the day: “Direct from Panama I was told that the sea conditions were not as calm as they seem to be in the pictures and the Captain was an experienced Captain. The seas were full of big swells and large waves.”

The captain of the boat apparently slipped over while trying to reverse the boat in an attempt to help the anglers reel the massive fish in. Unfortunately, the captain managed to hit the throttle as the boat leaned downward, causing the boat to take on water. “You can see how this might happen as you know when fighting a fish the Captain is facing aft with his hand on the throttles and when slipped the last thing your hand is holding onto is the throttle controls,” said the spokesman.

It seems that all of the fisherman and crew members managed to escape the encounter with their lives, but they didn’t manage to bring home the elusive black marlin. It’s probably still lurking somewhere out of the coast of Panama, looking for more unsuspecting boats to sink.