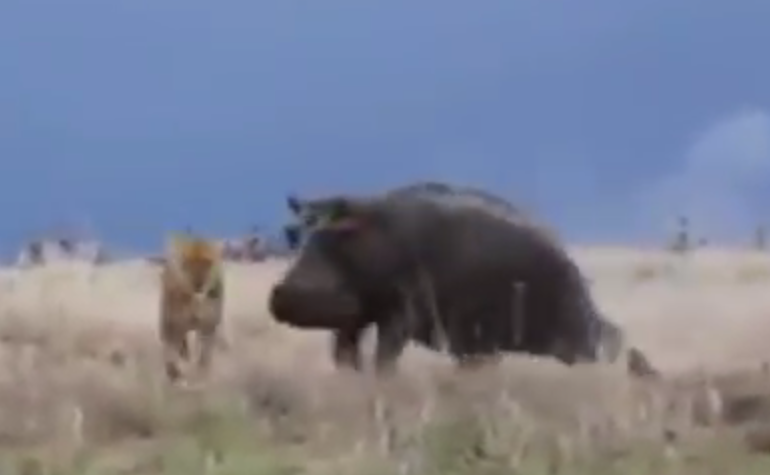 The lion: majestic, magnificent, regal; the king of the jungle even though it doesn’t actually live in the jungle; the apex predator in a continent rich in delicious and tasty herbivores. Respected by all. F***ed with by no one.

Only it seems someone forgot to tell Mr Hippopotamus. And yeah, I just assumed its gender. Deal with it. Mrs Hippopotamus is enjoying her mud bath and looking after the kids. They’re a traditional unit and the Hippopotamus feminist movement hasn’t started yet.

Come to think of it, neither has the Lioness for Equality movement, which might explain why it’s Mrs Lion out on the hunt for Mr Lion’s dinner. He’s probably at home shagging one of her friends and she’s just got to put up with it.

I bet she can’t believe her luck when she sees Mr Hippo lying on his side in the sun, soaking up some rays and generally chillaxing. She’d be forgiven for thinking he might even be dead and she’s scored Mr Lion an easy feed.

But wait a minute, Mr Hippopotamus is very much alive and he does not appreciate being woken the f*** up and interrupted by this bloody lioness.

In response, Mrs Lion nonchalantly walks away. She’d be whistling if she could. ‘Nothing to see here, Mr Hippo. Go back to your nap. Very sorry and all that.’

But Mr Hippo isn’t having a bar of it. He’s like, ‘yeah, nah, f*** that. Come back here you big bloody cat. I wanna show you something.’

Then, like a cop car in a chase movie, he nudges Mrs Lion in the back and spins her round. And that’s when things get very uncomfortable for poor Mrs Lion. 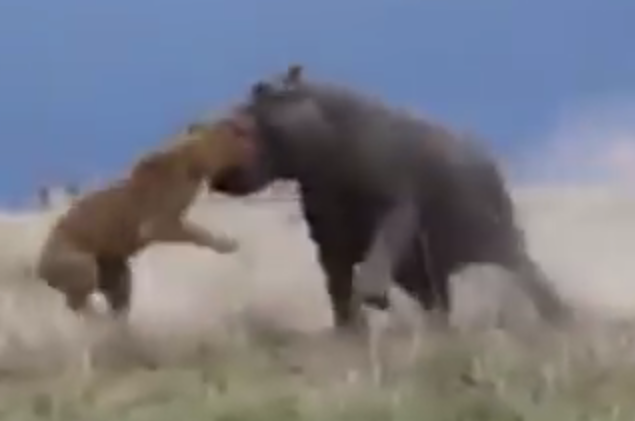 Mr Hippo grabs her by the f***ing head with his tusks. He’s huge. Her whole head is in his mouth and she can smell his breath and let’s be honest, it smells like arse. He could probably swallow her whole. Instead he shakes her like a f***ing shakeweight, flings her to the ground, tramples her and says. ‘That’s what you get for waking me up. Now f*** off!’

Bugger that! If I were Mrs Lion I’d seriously be telling Mr Lion to get his own bloody dinner next time.