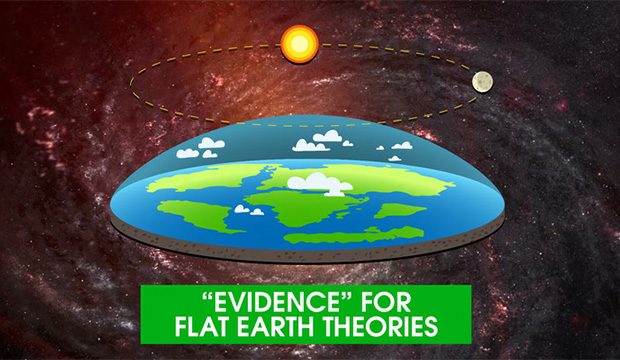 Flat Earthers Present Their “Undeniable” Evidence That The Earth Is Flat

The scientific minds over at I Fucking Love Science have put together an amusing compilation of content that science-denying flat earthers have used to justify their believe that the earth is flat. With the Internet bringing together just about every nutter on the planet, there’s plenty of material for them to use.

This video doesn’t just feature the numerous randoms who’ve decided that there’s a massive global conspiracy to conceal the flat-earth truth, but also a number of celebrities, including Shaquille O’Neal and Tila Tequila. Unfortunately there’s too many people out there who let their opinions be swayed by people because their famous, not because what they say is logical or convincing.

A quick search of the Twitter hashtag #flatearth brings up a disturbing number of results. There’s people who TRULY believe this crap!

A globe earth does not make any sense… i cannot believe i used to believe the earth was a globe.#FLATEARTH pic.twitter.com/n6v3WSzuhM

People in the past might’ve said the Earth is flat in jest in the past, usually in response to someone saying something extremely outdated, but now people are saying it, and they’re meaning it. And they refuse to accept evidence to the contrary.

How these people aren’t considered mentally ill is beyond me.

Today's landing from onboard, sped up camera

Obviously this SpaceX footage is ‘faked’ according to flat-earthers, as are the moon-landing photos, every spacewalk video ever and footage from the International Space Space, which you can watch live.

Yet throughout this massive international conspiracy, involving numerous governments, multiple international space agencies and thousands upon thousands of people, there has never been a single whistle-blower exposing this elaborate scam?

The real question is, why do people believe in crazy conspiracy theories like this? It’s hard to tell. There’s some clear religious influence for many of these people, who take a literal interpretation of their holy texts, but religion doesn’t turn you into an idiot overnight.