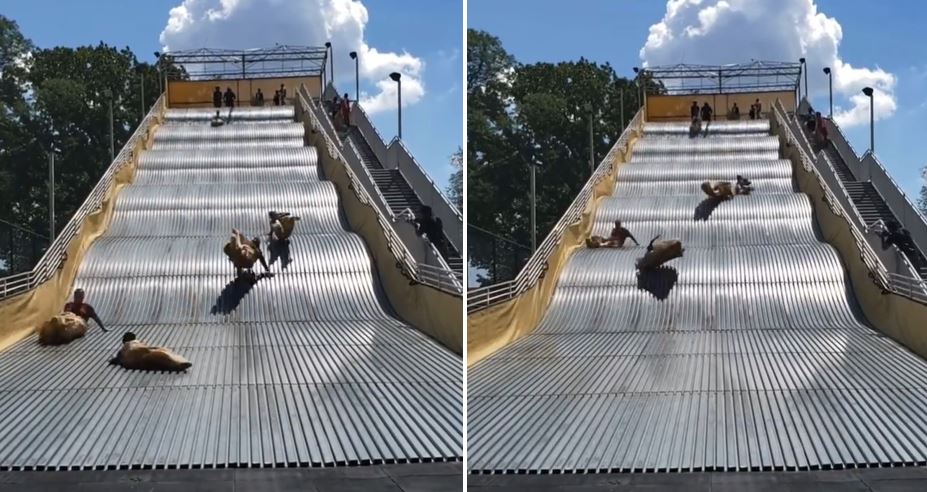 Anyone of a certain vintage knows that play equipment hasn’t been the same for a while. And, look, before you go telling us we’re longing for the old days, we’re not. We lost too many friends to old-fashioned roundabouts, see-saws, and slides. For a brief moment in Detroit this week, though, one slide showed modern kids what that s**t used to be like – and then it was shut down for adjustments.

All right, we don’t know if you’ve seen this or not, but one look at the slide is gonna give you a pretty good idea of whether or not you’d have ridden it or whether you’d let your kid ride it. We’re gonna suggest that unless your arse can take a serious pounding and you’re immune to whiplash, you wouldn’t be too keen on this one.

Literally the only “adjustment” they could make…

Yeah, nah, one look at those wicked dips should give you a pretty big clue as to what’s wrong with it. When you consider that it also spans a fair bloody drop, allowing gravity to provide extra speed, you’ll know exactly what’s gonna happen.

*turns gravity down a notch*

Of course, we don’t know what the weather is like there in Detroit right now, but a slide like that in our summer would probably burn like f**k too. Still, the issue behind the shut-down was the speed, the gravity, and the f**ken thumping ride kids were taking.

One of my fondest memories of visiting grandma in the 80s

Local parent Kenyatta McAdney was one of those there I the slide’s first four hours of operation. They sold their tickets to someone else, saying, “What I noticed was the impact they were hitting the ground with coming off the hills. If they would have kept riding on that slide, somebody would have got hurt.”

I think most of that time was everyone standing around waiting for an ambulance after that first run.

Yeah, no s**t. Four hours after opening, the slide was shut down for ‘adjustments’. According to the slide’s management, the slide was provided with extra wax to slow the kids down on their plummet. Joel Thomas, Belle Isle supervisor for the Michigan Department of Natural Resources, said “Hopefully, after our small adjustment we will be back up and running and the slide will be slower for more enjoyment.”

I didn’t realise there was audio so I watched it again, the thuds 😭🤣

Final thought: All right, let us know if you’ve ridden a slide like this and if you’d recommend it. S**t, let us know if you remember hectic injuries from old-school play equipment. We know more than a few kids took trips to Destination F**ked back in the old days, so we’re sure someone saw something traumatic. If that’s you, spill the beans in the comment section!

The giant slide at Belle Isle Park in Michigan was open for only 4 hours before workers shut it down to make adjustments.

I wonder why they decided to do such a thing 😳 pic.twitter.com/q7jpFdLdAO

Just in case you missed it, here’s one of Ozzy’s latest commentary videos…House of the Dragon – episode 1