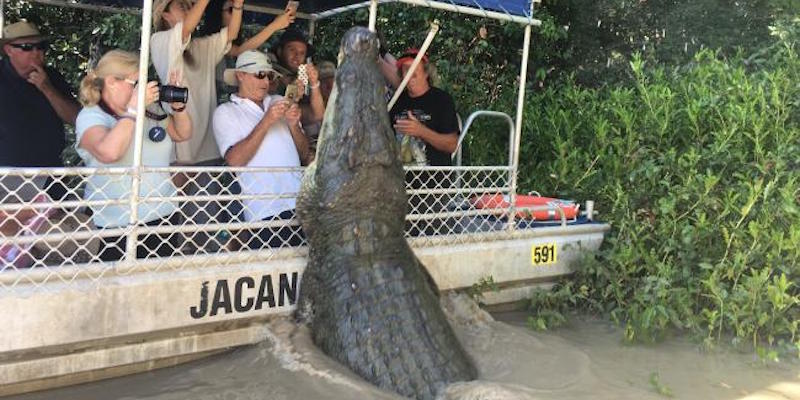 For years he’s been the alpha croc on the Adelaide River in the Northern Territory of Australia but now the 6-metre giant known as The Dominator has leapt into contention for the area’s most impressive jumping saltie award.

In a majestic display, Dominator was photographed last week leaping out of the water almost as high as the roof of an Adelaide River Cruises tour boat, much to the joy of its passengers.

“We like [the crocs] close, but not too close,” Adelaide River Cruises co-owner Morgan Bowman said.

The gargantuan saltwater crocodile resides just downriver from his world-famous 5-metre rival, Brutus, who first gained notoriety by performing the same feat back in 2011.

But the crocs’ rivalry goes well beyond mere showjumping for tourists: some local tour operators believe that a feud has broken out between the two dominant males who live in close proximity to one another.

And at some point over the previous wet season (which runs from November until April), Brutus – who has been missing his front right arm for years – received a large flesh wound which is yet to properly heal. Some locals think that only an animal the size of Dominator could be capable of inflicting such damage. But Bowman believes that the culprit is much more likely to be a new croc who is trying to claim Brutus’s patch for his own.

“Dominator doesn’t like him, that’s for sure, but we take care to keep them apart,” Bowman stated.

He also said that Brutus’ nasty gash was on the mend: “He’s healing up well, but obviously it’s going to take time…we’re very careful when we’re feeding him not to do anything that might make his injuries worse.”

Despite their early differences, Bowman said the two massive salties had learnt to keep out of each other’s paths and respect each others’ territories. CHECK OUT A CLIP OF DOMINATOR FROM A FEW YEARS BACK:

AND HERE’S HIS RIVAL, BRUTUS