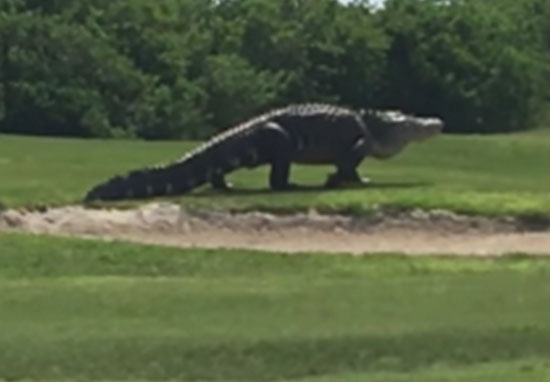 You know we bloody well love our crocodiliacs here in Ozzyland, and why wouldn’t we? We are, after all, home to some of the biggest and nastiest specimens on the planet. That’s not to say we’re the only ones though. The yanks have got some pretty sizeable species themselves. For a quick gander at just how sizeable, check out this video…

Righto, ladies and wankers, we’re scooting off to bloody Florida, the home of the caravanning geriatric, for this one. We’re flying over the beautiful beaches, turning left at Disney Land, and centring ourselves right on the golf course.

And holy sh*t, will you cop a load of that f**ken monster? As you can see, there’s a couple of blokes playing a nice round of golf when they notice that one of the animatronics has taken a wrong turn and walked itself right out of Universal Studios’ Jurassic park exhibit. 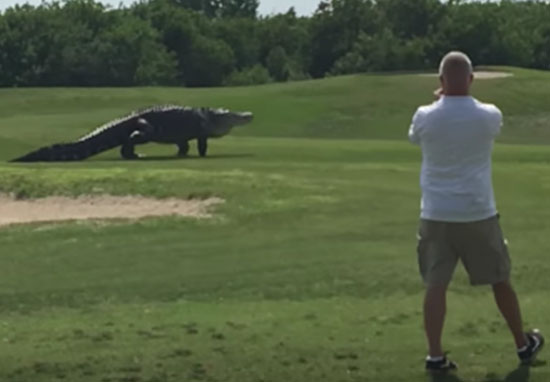 One of the blokes, Charlie Helms, took some footage of the big f**ken alligator and posted it online. In the video you can hear Charlie and his mate Dave marvelling at the behemoth size of the bewdiful predator.

Charlie sums it up well when he elucidates for us. “That is the biggest frickin’ alligator I have ever seen in my life,” he says. “Jeez, this thing must be fifteen feet long.”

“Yeah, that’s right. I’m strutting through your game. What you gonna do about it?” Credit: Viral Hog

Even though it’s hard to get a solid estimate because – well, because who could be f**ked, really – it’s evident that the reptile is humongous. If you asked Charlie, he’d say, “I think it’s two guys in an alligator suit,” which is exactly what he said.

Eventually, the alligator told the blokes it’d see them later, and f**ked off out of sight. One thing’s for sure though. If you lose a ball in the water, you don’t want to be heading in to go and get it.

Final thought: Golf might be a boring sport to some, but when you consider you can crack a beer while playing – and see some epic f**ken wildlife like that – it’s certainly got it’s perks. Good shit.